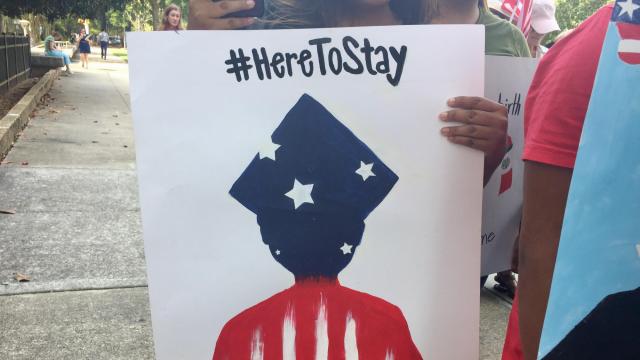 He showed little concern for the plight of more than 800,000 “dreamers” – brought to the United States as youngsters and raised in this country as natives who see it as their home.

Instead of being an attorney general focused on the law, he was a campaigner focused on suspicion and fear. He wrongly suggested that the DACA program somehow “contributed to a surge of minors at the southern border that yielded terrible humanitarian consequences.” The two situations are not even remotely related. The surge is mostly related to growing violence and deteriorating economic conditions in Central America.

“It also denied jobs to hundreds of thousands of Americans by allowing those same illegal aliens to take those jobs.” Session said. Not true. First, immigrants aren’t taking jobs from Americans. Most often they take jobs that allow English-speaking Americans to take higher-paying work. Also, analysts from a variety of perspectives, say the jobs many “dreamers” land tend to be entrepreneurial – so they actually are creating jobs.

The Cato Institute, which espouses a free-market and limited-government ideology, estimated that ending DACA and deporting those who are protected by it would cut economic growth by $280 billion in the next 10 years.

Neil Bradley, senior vice president at the U.S. Chamber of Commerce says the decision goes against the grain of Trump’s top promises. “With approximately 700,000 DACA recipients working for all sorts of businesses across the country, terminating their employment eligibility runs contrary to the president’s goal of growing the U.S. economy,” he said.

Later Sessions followed with rambling campaign-like rhetoric. “It will further economically the lives of millions who are struggling. And it will enable our country to more effectively teach new immigrants about our system of government and to assimilate them into the cultural understanding that supports it.” What? In fact, these 800,000 have done just that.  They HAVE grown up here.  They HAVE been educated in the United States.  They HAVE absorbed and embraced the culture and system of government.

Gov. Roy Cooper issued a statement Tuesday saying he believes it was wrong of President Trump to rescind DACA because it hurts productive members of our communities who were brought here as innocent children and won’t allow young people to remain in the only place they’ve ever known as home.

The executive order that created the DACA program came about not by the whim of former President Barack Obama, but because the spiteful anti-Obama leadership in Congress refused to take the issue up – even as a majority of Americans support it.

Perhaps that is why the president, even into late Tuesday evening, continued to send mixed signals. Just hours after he vowed to rescind the program over the next six months, he tweeted: “Congress now has 6 months to legalize DACA (something the Obama Administration was unable to do). If they can't, I will revisit this issue!”

We can only hope that in the six months Trump’s given Congress to act, with Obama and that blinding prejudice out of the picture, Congress will finally move to protect those who already contribute to our nation’s well-being and embrace the American Dream.