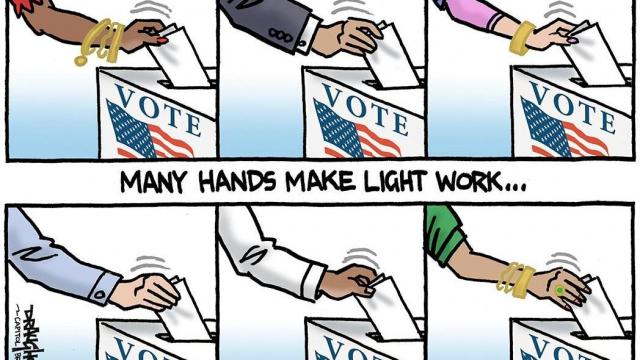 Every qualified voter needs to cast a ballot. Every one of those properly cast ballots must be counted. In a typical election year our emphasis would be on encouraging – cajoling – qualified North Carolinians to get out and vote. Make no mistake, we aren’t any less persistent. A record number of voters – about 4.6 million – have already cast ballots. But there are still as many as 3.7 million – 38% of the state’s registered voters -- who have not yet cast ballots. Tuesday is Election Day. Don’t miss it.

But this is a different election year. We have a president who is bent on planting doubt, conjuring confusion as well as abusing the courts and the postal service to keep some voters away from the polls or preventing their properly cast ballots from being counted.

Fortunately for North Carolina voters most of the efforts by President Donald Trump and his enablers on the national and state level have proved futile. Many, but unfortunately, not all.

Those seeking to thwart that mission first pressured Republican board members to resign when they backed a lawsuit settlement to enable more voters to cast ballots. Then they went to state and federal courts where even federal appeals judges and Supreme Court justices appointed by Trump rejected their plea. This action is critical to helping assure every ballot is counted.

The biggest uncertainty now seems to be whether those casting absentee ballots by mail will get their ballots counted. About 934,300 mail-in ballots have been properly received and will be counted when the North Carolina polls close. But there are at least half a million mail-in ballots that have been requested, but not yet received. Every voter who does properly mail their ballot on Election Day, should get it counted.

The postal service promises that a first-class letter will be delivered in one to three days. Typical performance is 92.4%. Since DeJoy took over the Postal Service and instituted a series of cuts and procedure changes, that rate had plummeted to as low as 84% in the Greensboro area.

Performance for on-time return of ballots in the Greensboro district was 84.7%. In the Mid-Carolinas district 85.1% of the ballots have been delivered on time in a recent five-day period.

In spite of the relentless efforts by Trump and state Republicans to make mail-in balloting more difficult in North Carolina, voting rights advocates, with agreements reached with the state Board of Elections, have been able to assure that mail-in ballots postmarked on Election Day, will be counted if received within nine days (Nov. 12). We hope that will account for even the worst of DeJoy’s imposed mail delivery inefficiencies.

Those who are still considering voting by mail, there’s no time to delay. Do it now. Be sure the ballot is properly completed and postmarked.

Sign up for the ballot tracking service HERE. That way voters and their local board of elections will be informed by the postal service when a ballot is sent out, when the local board receives it and affirmation that the ballot is proper and accepted for counting.

If you’re properly registered, go vote Tuesday. The state’s more than 2,660 polling places are open from 6:30 a.m. to 7:30 p.m. You can locate your proper polling place HERE.

Don’t let others speak for you. Vote!