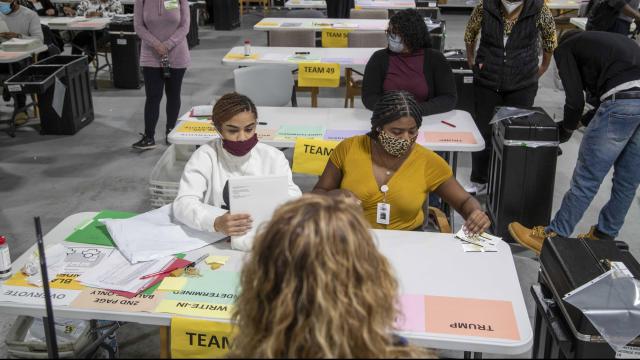 Republican incumbent Sen. Thom Tillis hasn’t made a peep to question his 95,633-vote victory margin over Democrat challenger Cal Cunningham. Tillis had such faith in the North Carolina vote count, that he declared victory even before the Associated Press.

Incumbent congressional Republicans Dan Bishop, Ted Budd, Virginia Foxx, Richard Hudson, Patrick McHenry, Greg Murphy and David Rouzer all seem to be fine with the ballot counts that returned them to office in the 2020 election.

But ask them and North Carolina’s other Republicans in Congress, as The Washington Post did last week and WRAL-TV news reported earlier this week, if the winner of the nationwide election for president was Democrat Joe Biden (by the way, he did win and states have certified he’s exceeded the electoral votes needed), and the answer doesn’t come so easily.

Tillis and Sen. Richard Burr, along with Reps. Virginia Foxx, George Holding and Mark Walker, didn’t respond to the Post’s inquiry. They weren’t much more forthcoming with WRAL’s reporter either. We’d like to know. Drop us a line. If you don’t want to tell us, give the folks at the Post or in WRAL’s newsroom a call back.

The failure to acknowledge the obvious – that Biden DID get the most votes from ALL Americans who cast ballots and DID capture the most electoral college votes to become the next president – isn’t some passive partisan act. Why do these elected representatives tolerate and even encourage Donald Trump’s outrageous and false claims in his desire to keep an office he didn’t win? Why aren’t they speaking up for the integrity of the ballots cast by voters who put them in office?

These elected representatives are breeding unwarranted distrust in our electoral system – the most honest and secure on the planet.

That isn’t some modest conjecture. Just look at what’s been done by state and local elections officials here in North Carolina. Every challenge – no matter how frivolous – has been objectively examined and found baseless. That’s been repeated by state and local election officials across the nation. U.S. Attorney General William Barr said there’s no evidence of fraud widespread enough to tip the election. Federal cybersecurity officials have called the election the most secure ever conducted.

While some members of North Carolina’s congressional delegation declined to respond, they have made statements on the record – in a variety of forums from the floor of the House of Representatives to digital bits and bytes of social media platforms in cyberspace.

The closest any Republican member of North Carolina’s congressional delegation came to acknowledging the obvious was McHenry, who in a Nov. 30 statement, stopped short of saying Biden was the president elect but did praise his selection of Janet L. Yellen to be treasury secretary. “While I will work against the Biden Administration’s agenda of tax increases and burdensome regulations, I think it’s important we have credible and experienced people to serve at the highest levels of government.” The Post said his office did not respond to requests from The Post to clarify whether he considers Biden the president-elect.

Bishop, who is from Charlotte, took to Twitter on Nov. 22 telling President Donald Trump to “keep fighting,” to get the case before the Supreme Court. He described as “block buster evidence, Sidney Powell’s fanciful and debunked conspiracy theory. “... In these circumstances, any Republican joining media’s ignorant clamor for @realDonaldTrump to capitulate is not fit for office,” he tweeted.

Last month Rouzer of Wilmington, said: “No, I don’t consider him to be President-elect until every legal vote is counted and every illegal ballot is tossed. Ensuring the integrity of the election is not a partisan issue. We should be patient and wait to see what happens with any recounts and all pending and any soon-to-be filed lawsuits,” in the N&O.

Budd of Forsyth County took to the House floor. In a Nov. 18 speech, he said: “His legal team needs to be given time to collect and present evidence of voting irregularities. Until the courts have played their constitutional role, we should be wary of declaring winners and losers.”

Hudson of Concord tweeted: “Election results remain unofficial & the process is far from over. Americans deserve transparency & I support President Trump’s calls to ensure every legal vote is counted & the rule of law is protected. By doing this, we can protect the integrity and confidence of our elections.”

Murphy of Greenville said in a Nov. 7 statement: “There have been many cases of alleged voter fraud and the President’s campaign has filed several lawsuits disputing some of the called results. I look forward to having the investigations completed to make sure that each American vote has been one that is verified and legal. When that process is completed, the nation needs to stand behind its elected leader.”

It is time to drop the fantasy. Acknowledging that Joe Biden’s won the election doesn’t equate to an endorsement of his policies or his party. There’s plenty of time for that debate over the next four years.

But it is past time for these elected officials to stand up for the system that put them in office.

It is time ALL elected officials to: Affirm legitimacy of our election; Reject Trump’s false claims and desperate acts to keep an office he didn’t win; Truly thank voters and election workers for their extraordinary effort and; Endorse the REAL results of the election.