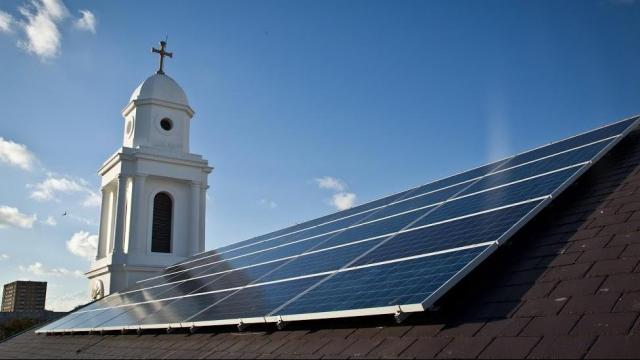 -- Passing the “Energy Freedom Act” will create jobs, make rooftop solar affordable and save on electric bills.
-- Despite bipartisan backing, GOP House Majority Leader Mike Hagar, an ex-Duke Energy employee, is blocking it.
-- Why is Duke Energy backing this in other states, like South Carolina, but not in North Carolina?

A CBC editorial: Tuesday, June 21, 2016; Editorial# 8020
The following is the opinion of Capitol Broadcasting Company

It is a piece of legislation that ought to be a slam-dunk for passage. After all, it brings together Republican stalwarts like Nelson Dollar of Wake County, Charles Jeter of Mecklenburg County and Bob Steinburg of Chowan County with Democrats like Grier Martin of Wake County, Pricey Harrison of Guilford County and Susan Fisher of Buncombe County – not to mention another 24 Democrats and Republican co-sponsors.

The bill could save homeowners thousands on their utility bills while invigorating a sector of the clean energy economy that is booming in states like South Carolina and Colorado. And it would not cost the taxpayers a dime.

But the Energy Freedom Act, HB 245 remains bottled up in the House Rules Committee – even as elsewhere in the state legislature the leadership is shoving through legislation making it more difficult to develop wind energy and expand the state’s thriving solar energy business.

The Energy Freedom bill would allow companies to own and operate solar panels on a customer’s property, on a rooftop, for example. Instead of selling the power to the utility, the company would charge the customer directly, at a lower price, for the electricity. Currently, North Carolina law forbids so-called third party sales – saying power can only be sold by a utility granted an exclusive franchise, such as Duke Energy. North Carolina is just one of five states that still has such a law.

"Free enterprise, in the form of market competition, is the cornerstone of the success of the United States and our economy," said bill sponsor Rep. John Szoka, R-Cumberland County. "Allowing North Carolinians to generate electricity on private property and allowing consumers flexible financing options, has immediate and long-term benefits that extend beyond the parties involved in third-party agreements. … (It is) an investment in the health of our state's long-term economic and energy future."

Among those blocking the bill is House Majority Leader, Mike Hager, R-Rutherford County. A former Duke Energy employee, he’s fought other renewable energy efforts, including leading the charge to kill a tax credit for solar energy development, saying: "If the only way a business can move forward is with a subsidy, then maybe we need to rethink the business."

An effort to circumvent the state’s ban on third party energy sales was launched last year in Guilford County where NC WARN installed a rooftop solar system on a church. NC WARN owned the rooftop system and sold the power to the church – at a rate much lower than it would have had to pay for power from Duke Energy. The legality of this arrangement is currently being battled out in the courts.

Rather than spending time and energy on a self-serving defense of an anachronistic law, Duke Energy should join with clean energy economy advocates in North Carolina – as it has done in other states, including neighboring South Carolina, to support laws like the “Energy Freedom Act.” Jason Epstein, general manager of Baker Renewable Energy, a Raleigh-based rooftop solar installer, says his company is doing “significantly more” work in South Carolina because Duke Energy helped craft a compromise agreement to expand residential solar. Even Duke Energy itself is getting in on this action – though not in its home state. Its unregulated division, Duke Energy Renewables, has a majority stake in REC Solar, a leading provider of third-party energy services – and savings – to American businesses.

If the members of the General Assembly, truly believe what they preach about free enterprise, open markets and getting the government out of picking winners in the business sector, they will, before closing out the 2016 session, pass the “Energy Freedom Act” to increase energy choices for North Carolina consumers while also cutting their utility bills.