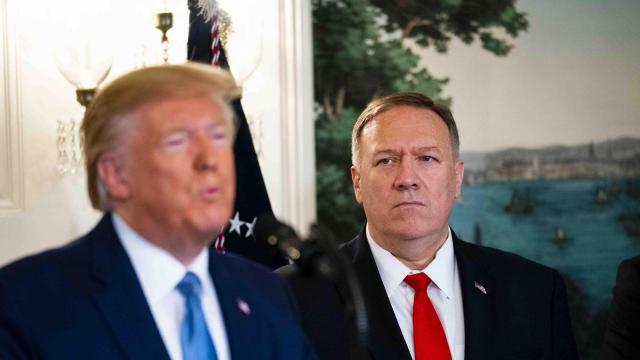 “It is no wonder that the American people distrust many in the media when they so consistently demonstrate their agenda and their absence of integrity,” Pompeo said, complaining – wrongly – that Kelly was dishonest.

This is not about disagreement over the foreign policy agenda in Iran or Ukraine. This is not about whether President Donald Trump wanted Ambassador Marie Yovanovitch fired; if it was the right thing; or even if Pompeo defended her.

It is about honesty. It is about the truth of how the Secretary of State and a reporter behaved during an interview.

The reporter DID NOT lie about the interview discussion topics, regardless of Pompeo’s statement the next day. There is a trail of email messages that confirm it. The reporter did not agree to be “off the record” at the post-interview session where she was belittled and sworn at.

Listen (don’t just read the transcript) to the interview.

Both in words and tone, reporter Mary Louise Kelly was respectful, assertive, probing, prepared and professional. She was NOT loud, discourteous, demeaning or dishonest. Don’t take our word for it. Believe your own ears.

The Secretary of State was evasive, condescending and eventually belligerent. Just listen.

In the after-interview session Pompeo “shouted at me,” Kelly said. She said Pompeo repeatedly used “the F-word” (which he hasn’t denied) and had her identify the Ukraine on an unmarked world map (which she did). He dismissively asked: “Do you think Americans care about Ukraine?”

He was bullying and sexist. (Would he ask a man to point out Ukraine on a map) Does he think Americans shouldn’t be concerned about a nation that’s been invaded by Vladimir Putin’s Russia and continues to be at war? Clearly, Pompeo lost his cool and we learned a lot about him because of it. He remains unrepentant, keeping an NPR reporter off the list of journalists traveling with him this week to Europe and Central Asia.

NPR aired a report by Kelly on her interview with Pompeo and the conversation that followed.

The next day Pompeo issued a fiery statement attacking Kelly specifically and the news media in general. NPR officials quickly and pointedly responded to Pompeo’s allegations.

“The statement from the secretary of state is blatantly false,” said John Lansing, NPR’s CEO. "Mary Louise Kelly has always conducted herself with the utmost integrity, and we stand behind this report," said NPR Senior Vice President for News Nancy Barnes.

The reaction of the president was predictable and troubling. He’s threatened to cut public radio’s federal funding. Federal appropriations via the Corporation for Public Broadcasting account for about 8 percent of the revenues for public radio stations nationwide.

When President Trump and Secretary Pompeo don't like the questions reporters ask, they attack, belittle and even question the patriotism and loyalty of news organizations. It is a repetitious ploy to avoid telling the truth. President Trump has fully documented that he cannot be trusted to tell the truth. Pompeo is following in line.

With dignity and determination, Mary Louise Kelly wouldn't be intimidated and stood her ground.

Good for her. The truth matters.