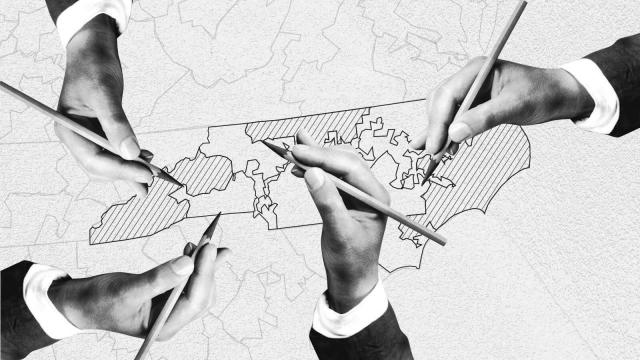 How can that be? Gerrymandering.

Is it fair or legal? No – as courts have repeatedly ruled.

The extreme gerrymandering of North Carolina congressional and legislative districts has become Exhibit Number 1 for electoral dysfunction in the nation. It has allowed the Republicans to create such an overwhelming majority that they have rendered legislative actions immune from a governor’s veto.

Courts have repeatedly ruled that the way legislative leaders have drawn election district lines has specifically denied representation for African-American voters. It muffled the concerns, interests and influence of state’s urbanized areas, where much of the state’s wealth and jobs are generated -- not to mention taxes collected.

This is not about Republicans or Democrats. It is about elections reflecting the will of the voters. The current system is unfair. It needs to change. Unfortunately, the leadership of the illegally-constituted majority of the legislature refuses to budge. They have bullied, fought, obstructed and procrastinated to maintain the illegal districts.

Bipartisan calls for reform have fallen on deaf ears. Efforts to advance proposals for the development of a non-partisan system of drawing congressional and legislative district lines have been blocked from any consideration.

This coming election offers the best opportunity yet for voters to take direct action and elect state and federal representatives who will press to reform the way we draw congressional and legislative district maps.

Common Cause of North Carolina has been in the forefront of a coalition of election reform advocates pressing for an independent, nonpartisan process for congressional and legislative redistricting. It has helped lead a convincing demonstration, with the bipartisan assistance of some of the state’s top former judges, of how nonpartisan redistricting can be accomplished. It is definitely not rocket science.

Common Cause has initiated, during this campaign season, its the “Fair Maps Pledge” and asked of those running for the state General Assembly – more than 430 candidates in 170 state legislative district – to sign a simple pledge: “In the 2019 legislative session, I pledge to support the creation of an independent, nonpartisan redistricting process for congressional and legislative districts.”

The effort has 32 of 50 Democrats running for the state Senate and 87 of 119 Democrats running for the House taking the pledge. Just three of 50 Republican state Senate candidates have signed on and only 20 of 119 Republicans in state House races have agreed to the pledge. Harnett County Republican Rep. David Lewis, who chairs the House committee on elections and ethics is the legislative leadership point person defending the gerrymandering. He’s responded to the pledge with an unequivocal “no” and said “can’t be done.”

When candidates talk of fair elections, if they don’t first and foremost support a nonpartisan system of redistricting, they are spouting empty platitudes. There are NO fair elections if there aren’t fair election districts.

Do you want to know which candidates have signed the pledge? It’s easy. Just click HERE.

Don’t see your local candidates names listed? Let them know they can go online HERE and sign up. Tell them if you don’t see their names, they don’t get your vote.