EDITORIAL: Critical decisions will come out of Tuesday's primaries - vote to be heard 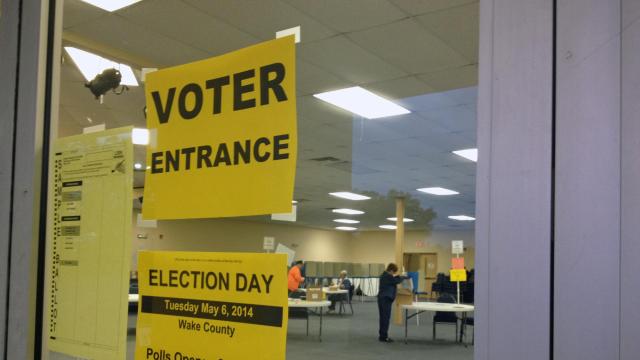 CBC Editorial: Monday, May 7, 2018; Editorial # 8298
The following is the opinion of Capitol Broadcasting Company

Sure, it’s the primaries, what’s at stake? What’s the big deal? The real action comes in November. Think again.

The leaders that runs the General Assembly have done their best to make it a challenge to vote and dampen interest in the elections. Thanks to the legislature’s gerrymandering and ceaseless election-rigging efforts – including cancelling judicial primary elections -- for the first time in 60 years there is no statewide election or referendum on the ballot to motivate voters throughout the state.

Despite all of this, turnout in early voting, which ended Saturday, was actually about 11 percent ahead of early voting turnout in 2014 when both Democrats and Republicans had contested statewide primaries for U.S. senator. Still, there’s little to cheer about. The 286,698 early-voting ballots represent a mere 4.24 percent of the state’s 6.9 million voters. In 2014, just 15.79 percent of the state’s registered voters participated in the primary. That’s not a high bar.

There are high stakes and critical decisions to be made on Tuesday.

Voters in the Third Congressional District in eastern North Carolina will pick their next representative in Congress. There’s no Democrat in the district that runs from the Virginia line down to Onslow County – and includes critical federal installations such as the National Seashore and Marine Camp Lejeune.

Incumbent Republican Walter Jones, who’s represented the district since 1995, is conservative but a less than consistently reliable vote for every item on President Donald Trump’s agenda. He’s being challenged -- and in the 2014 primary won by just 2,590 votes. The primary winner will be the district’s next member of Congress.

In the 9th Congressional District, which stretches from Mecklenburg County east to Cumberland County and Fort Bragg, incumbent Republican Robert Pittenger is being challenged again by Rev. Mark Harris, who lost by a mere 134 votes two years ago.

Make no mistake about it, primaries are consequential. Ask former Charlotte Mayor Jennifer Roberts. Just 21,850 out of Charlotte’s 544,908 voters – 4 percent – decided last year for all of the city to oust her from office in favor of primary opponent Vi Lyles, who went on to be elected the city’s mayor.

Think about it – 523,058 voters let a miniscule fraction of their fellow citizens make such a significant decision for them.

Will Republicans maintain their veto proof majorities in the North Carolina General Assembly? Will illegal gerrymandering continue to distort the state’s representation in the U.S. House of Representatives?

The outcome of Tuesday’s voting will go a long way toward determining the answer to those two important questions.

There’s little credibility to complaints of those who leave these important decisions to others.