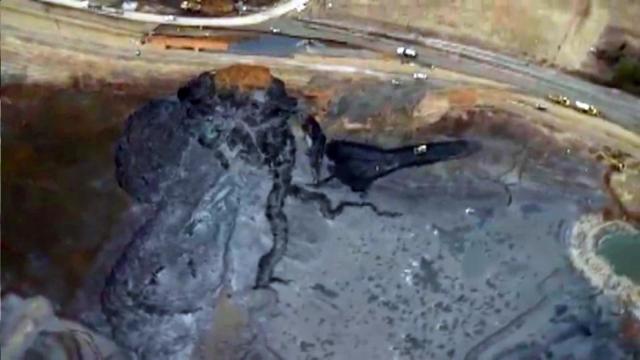 When someone says they take responsibility for something, say dumping 39,000 tons of toxic coal ash into the Dan River, it usually means they’ll also assume the burden of remedying the situation.

There’s no mistaking who was responsible for the February 2014 coal ash spill in Eden. In a March 12, 2014 letter to then Gov. Pat McCrory and the N.C. Department of Environmental Quality, Duke Energy CEO Lynn Good said, “We have accepted responsibility for the Dan River ash discharge and have taken a number of immediate actions following the event.”

A little more than a year later, as the company pleaded guilty to nine criminal violations of the federal Clean Water Act – four related to the Dan River spill – Good said: “We are accountable for what happened at Dan River and have learned from this event.”

But now Duke Energy Progress (the division of the company that serves much of eastern North Carolina and Asheville) wants to pass the cost of that accountability and responsibility on to the customers – the same folks who’ve suffered from polluted waterways and drinking water wells due to the company’s mishandling of the coal ash.

Just who pays is the $206 million-a-year question before the North Carolina Utilities Commission. It is the difference remaining between Duke Energy and the commission’s Public Staff (the state agency that represents consumers in utility matters) after efforts to negotiate a settlement in the utility rate case.

Currently Duke Energy Progress residential consumers pay a base rate of $11.13 monthly, in addition to the cost of the electricity they consume. The company initially sought to increase that base rate to $19.50 monthly. In closed-door talks, the Public Staff negotiated Duke to $14 a month rate. However, the critical issue of where the money will come from to clear up the coal ash mess – residential ratepayers or Duke -- has yet to be resolved.  Now, the issue is being argued before the state N.C. Utilities Commission – which will ultimately make a determination.

Duke officials say they should be allowed to charge consumers the full costs of the coal ash cleanup as part of costs of producing electricity. Others, particularly consumer advocates, contend the problem was a result of Duke’s poor management and the company, not the customers, should pay.

Ratepayers long ago consumed the power generated from burning the coal that generated the ash. They’ve had every reason to expect that Duke Energy would be responsible for the waste it produced. Think of it this way: Should the folks who make Barbie dolls be able to bill parents’ years later if there was plastic waste that wasn’t properly disposed of?

Duke CEO Good promised, back in 2015, that the company would set “a new standard for coal ash management and implementing smart, sustainable solutions for our ash basins.”

As a regulated monopoly, Duke Energy has an obligation to produce reliable, affordable and safe power while still being guaranteed a reasonable profit for the company and its shareholders. It is up to the state Utilities Commission to determine that balance.

When the company fails to meet one of the three obligations it has to its customers, it isn’t the fault of the ratepayers, nor should it be their responsibility to pay.

The Utilities Commission shouldn’t reward Duke for the failure to do its job, nor should its ratepayers, who have no other choice for electric service, be forced to subsidize that failure. No matter what the rate increase the Utilities Commission may approve, it should not include costs of dealing with Duke’s coal ash mistake.