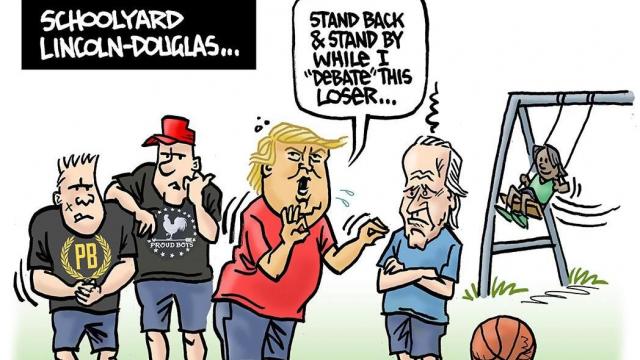 No one should have to put up with the kind of abuse that President Donald Trump subjected the nation to during his appearance with Joe Biden Tuesday night. It may have had the trappings of a presidential campaign forum and been presented under the auspices of the non-partisan Commission on Presidential Debate. This was no debate. It was no exchange of competing ideas.

It was a globally televised verbal schoolyard mugging by Trump. The victims were not just Biden and moderator Chris Wallace of Fox News – who showed extreme stamina, patience and determination in standing up to Trump’s interruptions, lies, taunts, insults, belittlements, deceits and mean spiritedness.

The American people watched as the central pillar of the nation’s representative government was relentlessly attacked and subverted. The world witnessed the belittlement of the most successful popular democracy – that had spread freedom around the globe and that women and men have made the ultimate sacrifice to uphold. All trashed by Trump.

It wasn’t funny. There was nothing entertaining about it. “Hectoring and deceptions” was how the New York Times described the debate. “Worst presidential debate in American history,” and “a sad example of the state of American democracy,” was how the Washington Post termed it.

It was tragic and must stop.

The Commission on Presidential Debates recognized the disaster. “Last night’s debate made clear that additional structure should be added to the format of the remaining debates to ensure a more orderly discussion of the issues,” the commission said in a statement issued Wednesday. “The CPD will be carefully considering the changes that it will adopt and will announce those measures shortly.”

The Donald Trump on display in the debate is the person the nation and the world has come to know all too well. There is no more to be learned by providing him another debate forum.

It should be clear, unfortunately, there is nothing the commission can do to get Trump to behave within acceptable or customary norms of decorum. The problem is not the formats the candidates’ campaigns agreed to. The problem is Donald Trump.

There is nothing to be gained from any further presidential debates for the remainder of the 2020 campaign.

The leaders of the Commission on Presidential Debates as well as the sponsors need, immediately, to pull the plug. The 2020 campaign will be better for it.

Do not make the next debate moderators, esteemed journalists Steve Scully, of C-SPAN or Kristen Welker of NBC News, endure the harassment and neglect that Chris Wallace was forced to tolerate. Trump’s playground bullying, which will not abate but only get ramped up in the subsequent events, subverts the Presidential Commission’s purpose of ensuring “that the general election presidential debates continue to serve their unique educational purpose of helping the public learn about the candidates.”

Biden should, but for obvious campaign strategic reasons likely won’t, refuse to appear with Trump. But spare him, the next moderators and the American people any further indignity.

There is no pleasure or gratification in making this recommendation.

But, for the commission’s integrity, for the sake of the nation’s electoral process, cancel the remaining debates.

(NOTE: The editorial has been updated to correct the names of the moderators for the next two presidential debates.)