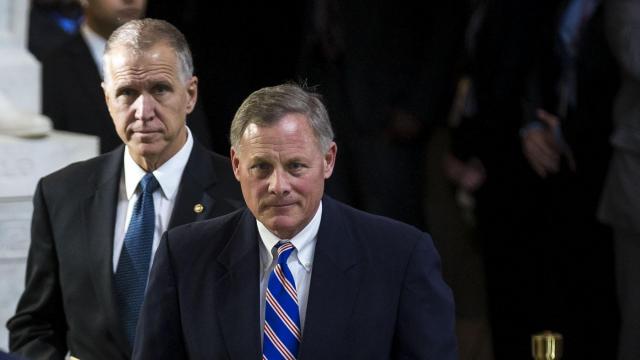 North Carolina’s two senators have concluded that Donald Trump is above the law. That’s a dangerous conclusion and not merely as a partisan matter. The convenience of playing to partisan fealty to Trump, who like Sens. Richard Burr and Thom Tillis, is a Republican, sets a precedent for every president to follow – Republican or Democrat.

Are they absent moral and ethical principles? The practical implication of what they’ve said and done, in objecting to the impeachment trial of Trump now pending before the Senate, is that presidents are untouchable, not accountable for their actions – particularly anything they might do near the close of their term in office.

Tillis says impeaching a former president, who has transitioned to being a private citizen, is a dangerous precedent and would turn impeachment power “into a political weapon.” He contends the vote of the people is enough to deal with any wrong-doing Trump may have done while in office.

“I have faith in the American people to assess the qualifications of presidential candidates and make an informed decision themselves, just as they have done every four years since George Washington was elected as our first president. Congress should not dictate to the American people who they can and cannot vote for.” While it might be noted that Tillis did vote to affirm the results of the 2020 election, he remains little more than a Trump hack – putting doing his bidding above what is best for his constituents in North Carolina or the nation.

What happens, Sen. Tillis, when a president wins re-election? We have no doubt, if the president were of another political persuasion, he’d be singing a very different tune.

Burr offered up a concrete example of the dilemma he’s dodging. As insurrectionists were being cleared from the U.S. Capitol after their deadly rampage on Jan. 6, Burr declared: “The President bears responsibility for today’s events.” He went on to say Trump promoted “the unfounded conspiracy theories that have led to this point.”

Burr, given his own words, seems unequivocal about Trump’s culpability for the riot and resulting deaths – including a law enforcement officer.

So, Sen. Burr, how would you hold Trump (or any other president) responsible for possible violations of the federal law committed while in office, but after their term’s ended? The U.S. Supreme Court had made it clear, thanks to Trump’s efforts to avoid prosecution for alleged state law violations in New York, that a president can’t skirt state prosecution. But the same is not clear on the federal level.

A federal Justice Department investigation and prosecution is just what Burr recommends. “This is a civilian (matter) now. A charge like this would go to the Justice Department and be referred for prosecution. Unfortunately, that’s not what they’re doing,” Burr said in response to questions from reporters last week when the Senate voted to move ahead with an impeachment trial.

Does Burr really think it is practical or appropriate for a federal Justice Department, under the Biden administration, to conduct a prosecution of the former president whom he just defeated? Even more so, a former president who, falsely, contends HE won the election by a landslide.

Is it OK for a sitting president, who foments an insurrection which fortunately was unsuccessful, to get by because, as Tillis suggests, they’ve transitioned to private citizenry? No, it is not.

The Constitution rightly sets a high bar for conviction of an impeached president – two-thirds of the Senate (67 votes).

But the trial will go on. The American people will get a chance to hear the facts and weigh evidence. Whether or not the Senate votes to convict the president, will be up to Burr, Tillis and their colleagues. Donald Trump is not above the law.

They may have tried to dodge their uncomfortable job as jurors, but now Burr, Tillis and the full Senate should listen with open minds to the facts presented.

If the facts add up, as Burr himself has said, to show Trump is responsible for the actions of the insurrectionist mob, they should vote to convict.