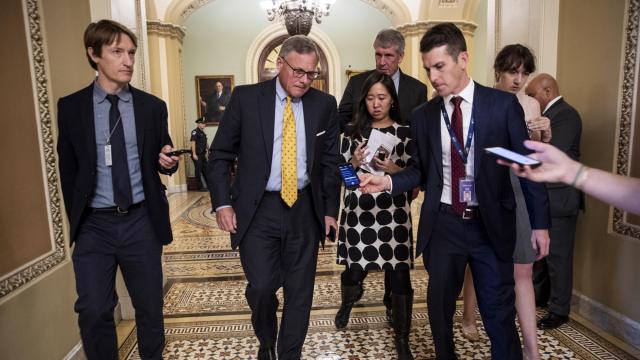 “I am committed to seeing that our judicial vacancies are filled with qualified judges.” That’s what Sen. Richard Burr promised, in a Feb. 3, 2014 letter to his North Carolina constituents.

Those hollow words were part of his defense for using his authority – withholding the so-called blue slip and blocking HIGHLY qualified nominees from even being considered – by the Senate Judiciary Committee for federal judicial posts in North Carolina. It was over a political feud Burr had with President Barack Obama. One of the nominees he blocked Jennifer May-Parker, was someone he recommended the president nominate!

Since President Donald Trump came into office, the Senate has voted on seven judicial nominees rated unqualified by the American Bar Association. Burr along with his North Carolina colleague Thom Tillis, has voted for every one of those nominees.

Burr’s used his blue slip power to keep a district court judgeship in eastern North Carolina vacant for more than 13 years and denying votes on highly qualified nominees – the longest-standing vacancy in history. The confirmation of UNC Law Professor Richard Myers earlier this month brought that sorry legacy to a close.

While Burr expected – and took advantage of the authority when it worked to his own interest – he didn’t respect it twice this year. In May he voted for the nomination of Joseph Bianco as a judge for the 2nd Circuit Court of Appeals even though Home-state Sens. Chuck Schumer and Kirsten Gillibrand of New York opposed the nominee and did not return blue slips. At least Bianco was rated “well qualified” by the ABA.

Just days after North Carolina’s judicial vacancy was finally filled, Burr voted for Lawrence VanDyke to fill a vacancy on the 9th Circuit Court o Appeals. The ABA rated him as not qualified. The two senators that represented states in that circuit -- Diane Feinstein and Kamala Harris -- would not return blue slips.

Contrary to practice under previous Republican and Democratic control of the Senate, current Senate Majority Leader Mitch McConnell allowed the Judiciary Committee to move ahead with the nomination.

Statements from colleagues presented during his non-blue slip hearing from the ABA evaluation described VanDyke to be “arrogant, lazy, an ideologue, and lacking in knowledge of the day-to-day practice.” The scathing letter from the chair of an ABA committee was the result of 60 interviews with lawyers, judges and others who worked with VanDyke when he was a Justice Department attorney.

Acquaintances also alleged a lack of humility, an “’entitlement’ temperament,” a closed mind and an inconsistent “commitment to being candid.” The ABA report said that

VanDyke “would not say affirmatively that he would be fair to any litigant before him, notably members of the LGBTQ community.”

So, here’s what’s been revealed in recent days about Richard Burr’s standards for judicial appointments:

Competence, temperament, are nice. Senate procedure and treating colleagues with deference you demand are fine and good. But make no mistake, when it comes to Burr’s vote, those qualities and concerns never Trump politics.