Editorial: Back candidates who will repeal HB2, N.C.'s suffered enough 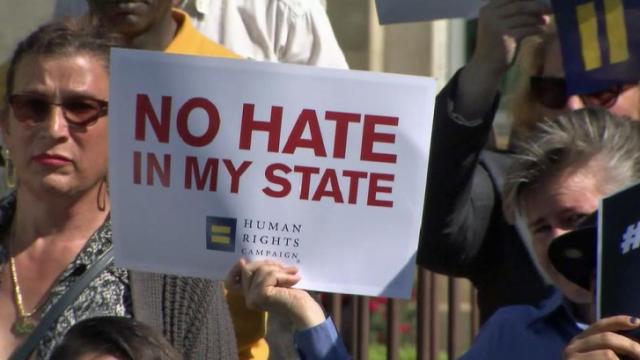 PART 2: In the season of endorsements, Capitol Broadcasting Company is focusing on issues not individuals. Get to know where the candidates stand and vote for those that line up in agreement with the issues we’re outlining in a special series on this page. Political parties and ideologies are irrelevant.

A CBC Editorial: Monday, Oct. 10, 2016; Editorial# 8066
The following is the opinion of Capitol Broadcasting Company

Make no mistake about it. Notorious House Bill 2 is pushing the top of North Carolina’s worst law list. It is a salute to bigotry and discrimination. It is NOT about bathrooms or anyone’s safety. No amount of political spin, no amount of advertising, will cover it up. It is about prejudice.

Do we need to be stronger in our disgust for the awful blight on the reputation and brand of North Carolina?

Let’s be clear. No one who voted for HB2, and has not yet repudiated and apologized for that vote, deserves to be in public office – anywhere or at any level. Similarly, any candidates for public office who won’t support and vote for its immediate repeal, should not have the honor of receiving anyone’s vote or holding public office.

HB2 legalized discrimination in North Carolina. Under North Carolina law today, thanks to HB2, an employer can fire someone simply because they are gay, lesbian, transgender or bisexual. The authority of North Carolina’s local governments to enact rules and regulations they feel best suit their communities – when it comes to LGBT issues or even setting a minimum wage for contractors who do work with local governments – has been stripped by HB2.

Do any of these things have ANYTHING to do with bathrooms, locker rooms or public safety? Absolutely not!

HB2 was a desperate, needless and misguided grasp to foment a campaign wedge issue. The city of Charlotte’s anti-discrimination ordinance needed no panicked reply from the General Assembly and the governor. The people of that city are more than capable of reacting – in support or objection.

It has been the broad condemnation of HB2, not the Charlotte ordinance, that has led to the devastating economic consequences and scorn North Carolina has faced since 9:57 p.m., March 23 when Gov. Pat McCrory signed the law.

While N.C. Commerce Secretary John Skvarla has sought to spin-doctor the losses the state has faced, cities and towns; mom-and-pop corner stores and major corporations; universities big and small; and sports fans throughout the state know better.

Just ask PayPal, Deutsche Bank, the NCAA and the ACC, to name a few, about HB2. They believe discrimination is morally wrong and bad for business. They want no part of it and are taking their business elsewhere. Our brand is taking a beating.

HB2 needs to be repealed as soon as possible. No hemming-and-hawing. No quest for “compromise.” The city council in Charlotte did nothing wrong.

Vote for candidates that promise to completely repeal the law. Our state has suffered enough.