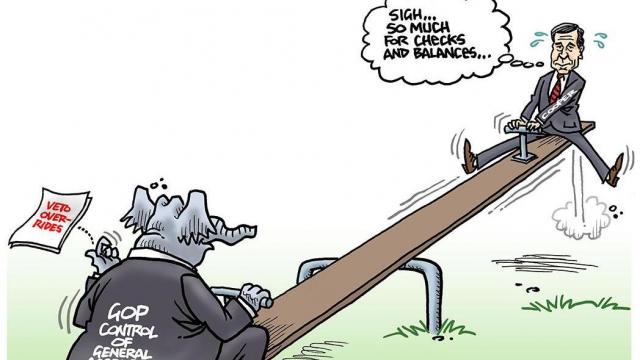 On Saturday, when legislators are currently scheduled to meet to try to override Gov. Roy Cooper’s veto of two abysmal pieces of legislation seeking to change state election laws in mid-campaign -- that never should have been considered in the first place – there will be hyper focus on the votes they cast.

The unrelenting efforts, in the midst of the campaign, to shift and change wording and candidate identification on ballots has done little more than generate confusion among voters. Senate leader Phil Berger and House Speaker Tim Moore are disingenuous at best when they contend they "will override these vetoes to deliver clear and consistent voter information on ballots this November.”

They are doing just the opposite.

Some of the most partisan legislators now find themselves seeking re-election in highly competitive districts – yes there are a handful despite the massive gerrymandering imposed by the Republican leadership -- suddenly see the wisdom of the other side of the aisle. Why? Because they know what they do could become part of critical campaign talking points and attack ads.

Based on past behavior and rhetoric, that could be the ONLY reason why Republican state senators Trudy Wade of Guilford County and Wesley Meredith of Cumberland County finally did the right thing and opposed both bills making mid-campaign adjustments in state elections laws (Joel Ford of Mecklenburg County who lost his primary, was the lone Democrat to vote with the Republican majority.)

The two are in hotly contested districts. Other senators in competitive races – Jeff Tarte from Mecklenburg County and Tom McInnis didn’t record votes – having “excused” absences.

When legislators must decide on whether to override the veto on these two bills every member of the General Assembly should be on record. This is their job. Short of matters of life-and-death this is what they got elected to do and failure to do it is a dereliction of duty.

The right thing to do is to vote to uphold the governor’s veto and uphold the rule of law.

The right thing to do is to say no to totalitarian-style tactics that constantly shift election rules in the midst of a campaign to benefit those in power.

It doesn’t take a high-paid political consultant to know where to find the votes to sustain Cooper’s veto. It is among Republican legislators in competitive districts; Republicans representing Democratic-leaning districts and Republicans who aren’t seeking re-election and, thus should have little concern about any “retribution” from the leadership for failing to tow the party line.

Below is a list of Republicans seeking re-election in districts rated “competitive” by the North Carolina Free Enterprise Foundation, an organization that seeks to provide “non-partisan political research, and objective analysis to foster informed civic involvement.” Also listed are Republican legislators running in districts that were carried by Democratic presidential candidate Hillary Clinton – as identified by NC FREE. Also, there is a list, compiled by legislative staffers, of Republican legislators who aren’t seeking re-election.

The list includes e-mail links and telephone numbers for these legislators.

Do not delay. E-mail them. Call their offices. Tell them enough is enough. Tell them you’re watching to make sure they do their duty and vote. And that vote must be to sustain the governor’s veto of these two bad laws.

Why? Because it is past time to stand up for:

The election is fewer than 100 days away and voters’ will remember this vote.

REPUBLICANS IN THE N.C. HOUSE WHO REPRESENT DISTRICTS CARRIED BY HILLARY CLINTON IN 2016

REPUBLICANS IN THE N.C. SENATE WHO REPRESENT DISTRICTS CARRIED BY HILLARY CLINTON IN 2016
(Not already in competitive districts)