Editorial: A 'day of infamy' we should have seen coming 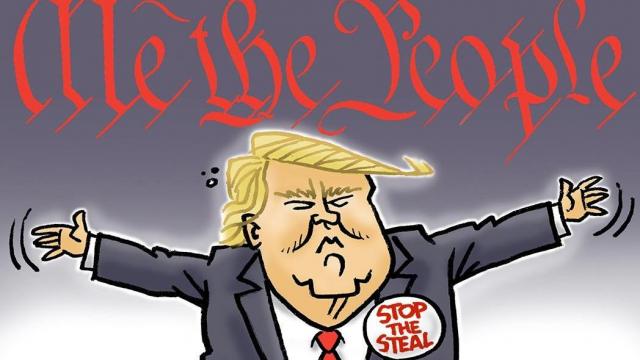 It was horrible to watch. It was disgraceful behavior. We should have seen it coming. Too many, especially Republicans who should know better, especially those from North Carolina, have spent the last four years looking the other way.

Mobs, encouraged on by a President emboldened by the reflexive affirmation of his congressional GOP loyalists, overran the security forces and stormed the Capitol – the world’s temple to representative government.

This is a nation built on the rule of law and trust in the system where the peaceful transfer of power is a hallmark of our national stability. Wednesday that was shattered. The rule of law was assaulted. The work of Congress was forced to a halt, the members of House, Senate and staff locked down and barricaded into secure locations as insurrectionists swarmed the Capitol, vandalizing and breaking doors and windows. At least one life was lost.

Until Wednesday, this was the stuff of other places, nations in remote corners of the world. Once it was American leaders who’d express shock and dismay at the chaos in distant seats of power. Now it is foreign leaders, like Britain’s Boris Johnson, expressing alarm at what they’ve witnessed. “Disgraceful scenes in U.S. Congress. The United States stands for democracy around the world and it is now vital that there should be a peaceful and orderly transfer of power,” Johnson said.  Imagine living at a time when a comment like that is relevant to the United States?

Turkey, a dictatorship that locks up journalists and political opponents, offered an almost mocking reaction to the scene in Washington. “We invite all parties in the U.S.A. to show restraint and common sense,” said a statement from the Turkish foreign ministry. This is the stuff that Americans say in reaction to disruptions elsewhere.

No longer is such a scene tragically unimaginable. Shocking, perhaps? But it should not be a surprise. This is REALLY what the four years of Trump presidency was about -- enabled and sanctioned by his party partners in Congress. Bullying, threats and violence.  Inciteful rhetoric, ceaselessly inflaming bigotry and hate. It is behavior that gave license to the ransacking of the world’s foremost workplace of democracy.

As the Republicans in Congress scattered Wednesday to seek safety and protection from the siege on the Capitol, they were fleeing the product of their failure to stand up to for the Constitution they’d sworn to uphold. It was the toll for bowing to a dictatorial narcissist.

Even as the mobs were overrunning the Capitol, Trump couldn’t bring himself to stand up for an election that he lost, continuing to claim it has been “stolen.” He refused to condemn the horrible behavior the world was witnessing. It was another tragically familiar disturbing display of tone deafness and dangerous behavior.

For four years those who should know better and should have stood up – Republican leaders and office holders – instead backed and voted support for a serial liar and petty dictator. North Carolina Sen. Richard Burr, in his role as a leader of the Senate Intelligence Committee, knows as well as nearly anyone of Trump’s excesses. Still, until Wednesday evening, he has been a silent aider and abettor. “The President bears responsibility for today’s events by promoting the unfounded conspiracy theories that have led to this point,” he said, describing the events as “an attack” on the nation. Nothing new. Where’s Burr been the last four years?

Thom Tillis said Wednesday he was “proud to support” Trump and campaign with him.

The seven North Carolina Republicans who announced they’d object – without a shred of evidence of anything being amiss -- to the results of the election that Democrat Joe Biden won are, frankly, un-American. It is a label of shame that now describes Dan Bishop, Ted Budd, Madison Cawthorn, Virginia Foxx, Richard Hudson, Greg Murphy and David Rouzer. The four years of silence from Patrick McHenry, as well as Burr and Tillis, don’t absolve them from responsibility. They are aiders and abettors.

As we’ve already said, acknowledging that Biden won the election isn’t acquiescence to his positions. It is standing up for America, standing by the nation’s 158.4 million voters and the integrity of their ballots, regardless of the candidate they supported.

Over the last four years, North Carolina’s Republicans in the U.S. House including Dan Bishop, Ted Budd, Madison Cawthorn, Virginia Foxx, Richard Hudson, Patrick McHenry Greg Murphy, David Rouzer along with those who’ve left like George Holding, Mark Meadows and Mark Walker, haven’t been shy at pointing the finger of blame at those who have protested against bigotry and pressed for racial justice, suggesting their responsibility for any disruptions and vandalism.

Their silence speaks loud and clear of their responsibility. Today, North Carolina’s Republicans in Congress own an assault on American democracy that will, truly, live in infamy.