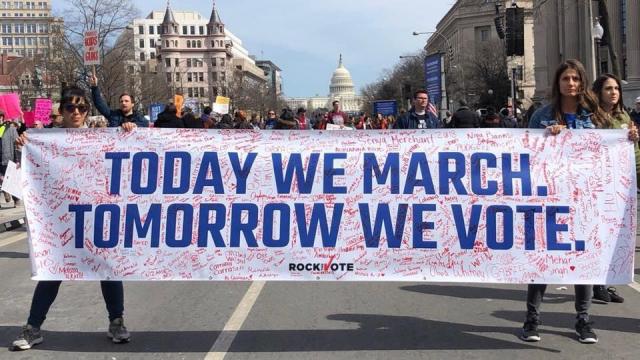 Vote – particularly young people. It is one of the strongest refrains coming from the “March for Our Lives,” the political movement that’s grown out of the tragic Parkland, Fla. high school shootings.

Voting makes a difference and prompts change. Not voting leaves it to others. For the hundreds of thousands of young people who’ve taken to the streets to demand change, the challenge is at their feet – quite literally.

We’ll be able to see the proof behind the rhetoric. Will they register and will they vote?

Young voters, particularly those voting for the first time this year, are positioned to have a huge impact. In North Carolina alone, there are an estimated 186,000 17-year-olds who will be eligible to vote on Nov. 6, 2018.

During the last mid-term election, in 2014, the youth vote was at a 40-year low, says Hunter Buxton, founder of First Vote NC, now an initiative of Education NC that seeks to provide election experiences for high school students so they graduate civic ready.

Now, that year the young shouldn’t have shouldered all the blame. The North Carolina legislature did all it could to discourage and block young people – and plenty of others – from registering and voting. In 2013 the Republican leaders of the General Assembly forced through a series of restrictive changes in the state’s voting laws – several of which were later voided by the courts. The bill eliminated an early registration system for 17-year-olds who would be 18 on Election Day. It was reinstituted for the 2016 election by the federal courts.

Already this year there are voter registration efforts aimed at young people. Since late December, the State Board of Elections has distributed 9,300 voter registration applications to 15 locations around the state – and that does not include the majority of such events that are organized locally through county elections boards.

Younger voters are becoming a larger share of the total electorate in North Carolina, says Michael Bitzer, a professor of politics and history at Catawba College. He writes the authoritative blog “Old North State Politics.” His analysis shows that about 32 percent of the state’s registered voters are younger than 37. Those registered voters don’t show up at the polls in the same proportion.  But Bitzer points to the new make-up of the 11-member Charlotte City Council, where a majority are now younger than 40 that might be a sign.

If the protests are a sign of increased young-voter engagement, it will be a wave that could have a big impact – not just in 2018 but for several years to come.

For now, it’s guesstamating. The challenge for those marching and speaking up will be to follow through – how many of the 186,000 in North Carolina will register and vote.

It isn’t hard. Early registration is available at most high schools, state Division of Motor Vehicles branches and many other places. There’s information available on line here.

See you at the polling place.