As Southwest Edgecombe County High School's senior class president, Marvin Wright was allowed to write a speech and read it aloud at graduation.

"I really worked hard on this speech," he said.

Wright said on the day of graduation, he was told by school administrators that he would not be able to read his speech. He would have to read one the school wrote for him. 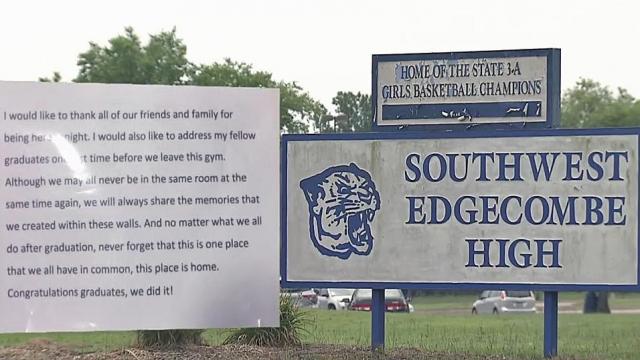 "I think my classmates would like to hear what I have to say instead of the one you wrote for me," Wright said.

While on stage during the ceremony, Wright said he followed his heart and chose to read his speech instead.

In a video, the principal and other staff members are seen talking behind Wright, clearly upset he wasn't following orders given at graduation rehearsal.

"My thing to him was to follow your heart," his mother, Jokita Wright said. "He put God first. He spoke about parents, his classmates and spoke about his mom."

When Marvin Wright left the stage, he discovered the principal had taken his diploma.

"(He said) 'Mom, they took my diploma, they won't give it to me,'" Jokita Wright said. "At that moment I was totally upset. I was upset."

"I only have one chance to graduate from high school and it was really an embarrassing moment," said Marvin Wright.

"His diploma was taken...it was hurtful not only to him and his family, but to all of us," Barnes said.

The school system gave no specific reason for wanting Wright to recite their simple, short paragraph.

Sources told WRAL News Wright's speech was too long and that he failed to meet an approval deadline. Wright said he was not aware of any deadline.

In a statement to WRAL News, a school spokesperson said there was nothing wrong with the content of Wright's speech.

"The expectation is that all graduation speakers read the speech that has been prepared and placed at the podium...It is very unfortunate that his diploma was pulled and it should not have happened. An apology has been issued to Marvin and his family," the statement said.

Wright said that since it was a last-minute decision to read his speech, he did not have a hard copy and had to read it off his phone. This violated school guidelines.

Wright's principal, Craig Harris, hand-delivered his diploma to his home Sunday afternoon, and the superintendent apologized via phone. WRAL News reached out to school administrators for additional comments, but no additonal information was made availible.

Wright is now headed into the Navy this fall.