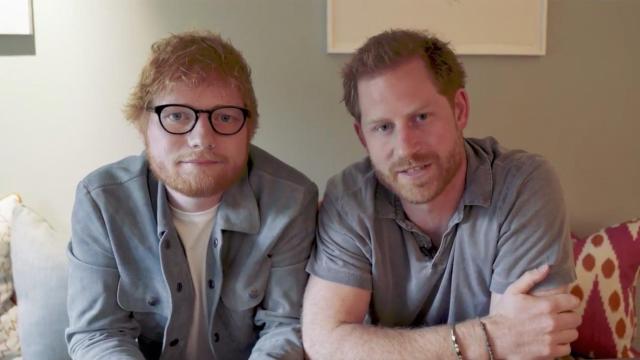 CNN — Prince Harry and Ed Sheeran have teamed up in a video to raise awareness for World Mental Health Day -- with a light-hearted jibe at their own plight as Britain's most famous redheads.

In the video, shared on the official Sussex Royal Instagram account, the famous duo discuss the issue of mental health, and urge everyone to "look out for anybody that might be suffering in silence".

Yet despite the serious message, the video starts on a humorous note. When the pair sit down to discuss their collaboration, Prince Harry explains that Sheeran has the right "skill set" to create a song to help fight the problem.

"This for me is a subject and conversation which is just not talked about enough, I think people all over the world are really suffering," Harry says in a serious tone.

It soon becomes clear that wires have been crossed, when Sheeran begins describing a song he has started writing to challenge the stigma faced by redheads.

"People don't understand what it's like for people like us," he says. "With the jokes and snide comments. I just feel like it's time we stood up and said, 'we're not going to take this anymore. We're ginger and we're going to fight'."

"Umm slightly awkward," Prince Harry responds, noting that he had invited the singer to his house to discuss World Mental Health Day. When Harry explains the miscommunication, Sheeran is seen deleting the words "Gingers United" from a presentation on this laptop.

At the start of the video Sheeran is seen ringing Prince Harry's doorbell, which chimes to the tune of God Save The Queen. Harry opens the door and jokes: "It's like looking in the mirror."

The pair conclude the video with a serious message, urging everyone to reach out to those struggling with mental health issues.

"Guys this World Mental Health Day, reach out, make sure your friends, strangers look out for anyone who might be suffering in silence; we're all in this together," Prince Harry says.

A message released by Kensington Palace in connection with the video, added: "Both Prince Harry and Ed Sheeran want to ensure that not just today, but every day, you look after yourself, your friends and those around you.

"There's no need to suffer in silence -- share how you're feeling, ask how someone is doing and listen for the answer. Be willing to ask for help when you need it and know that we are all in this together."

Mental health has become a cornerstone of Prince Harry's philanthropic work and he spearheaded the Heads Together campaign alongside Prince William and The Duchess of Cambridge in 2017.

That initiative brought together a coalition of eight charities in a bid to tackle stigma surrounding mental health issues, raise awareness and improve the provision of services for sufferers.

World Mental Health Day is marked annually on October 10, and the World Federation for Mental Health chose suicide prevention as the main focus for this year's event.

Every year close to 800,000 people die from suicide around the world, according to the World Health Organization. In the UK alone there were 6,507 deaths from suicide in 2018, government data shows.

To mark the day, Prince Harry also visited a school in the British city of Nottingham to talk with students about mental health and the challenges they face in education.