ECU interim chancellor: 'I should not have been doing all the things I did'

Greenville, N.C. — The interim chancellor at East Carolina University said Tuesday that he regrets drinking at an off-campus bar last week, but he insists that he did nothing wrong and that the incident has been blown out of proportion.

University of North Carolina officials placed Dan Gerlach on administrative leave Monday after photos and video surfaced of him socializing at two Greenville bars known to be frequented by ECU students. 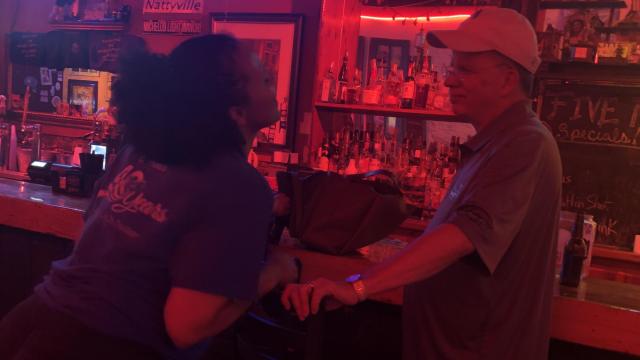 The reports to which Roper referred were photos and video published first on social media of Gerlach drinking, dancing and interacting with people at the two bars, Sup Dogs and Club 519, on Wednesday, Sept. 25.

During a Pirate Radio interview Monday afternoon, Gerlach admitted he exercised poor judgment and shouldn't have had more than one beer.

He said he met a lot of students at Club 519 who wanted to take photos with him, so he stayed longer than he should have. Then, one woman at the bar started "trying to snuggle up to me," he said.

"I think, in retrospect, [it would have been better] if I would have tried to get away from that," he said. "But there were some pictures taken of me [with her] that I think were shot to make it look very bad."

Gerlach was named interim chancellor in May after Cecil Staton was forced out after a clash with Harry Smith, then the chairman of the UNC Board of Governors. Smith stepped down as chairman Tuesday, but he has said he will stay on the board.

Gerlach said people told him he needs to be approachable as chancellor, so that's what he has tried to do.

"I carried that too far," he said of his encounters last week. "I regret the distraction that's caused, but I don't want anyone to think that these pictures are anything more than me talking to people and encountering people probably too late at night in a bar."

An ECU spokeswoman confirmed Sunday that Gerlach visited two campus-area bars on Sept. 25 and interacted with people there.

In a statement to WRAL News Monday, Gerlach said he will cooperate "fully and quickly" with the investigation.

"Since arriving at ECU, I wanted to be visible and supportive of Uptown Greenville and ECU students. Pirate Nation places a high premium on personal engagement. I will certainly be mindful of how I do so in the future, and regret that these pictures and videos distract from the progress the university is making in so many areas. I also regret that these pictures are being perceived by some as more than they are," Gerlach said in the statement.

"I am very grateful for the strong vocal support from so many Pirates," he added.

On Twitter, Club 519, which was one of Gerlach's stops, several ECU alumni and at least one current professor proclaimed their support for his actions. The club, on Instagram, said, "Nobody has alleged any inappropriate behavior" by Gerlach while he was there.

Rob Waldron, owner of Club 519, said Gerlach, when approached by one woman, "was too damn nice to just tell her 'get off me.'" His version of events was backed up by bartender Brandon Smith and another Club 519 employee, both of whom were present when Gerlach visited the club.

On Twitter, the response to the controversy has been overwhelmingly in support of Gerlach. Many commenters have been using the hashtag "#IstandwithDan."

Another supporter, ECU alumnus Brandon Avery, questioned the timing of the controversy, noting that it's been less than two weeks since Gerlach announced his intention to seek a permanent appointment to the job.

"Alternative headline," Avery tweeted: "Local witch-hunt starts because interim chancellor is the obvious choice for the permanent position and that doesn’t fit into someone’s agenda."

Asked for more elaboration, Avery told WRAL News, "I’m not going to throw around specific accusations, but suddenly having issue with someone who has nothing but positive reviews since his arrival, shortly after his announcement that he’s seeking the permanent position just doesn’t sound like a good headline."

WRAL News asked Senate President Pro Tem Phil Berger and House Speaker Tim Moore for a comment on the investigation. Berger spokesman Pat Ryan responded, "It’s our understanding that there’s an internal investigation underway into the photos and videos, so it wouldn’t be appropriate to comment until all of the facts are in."