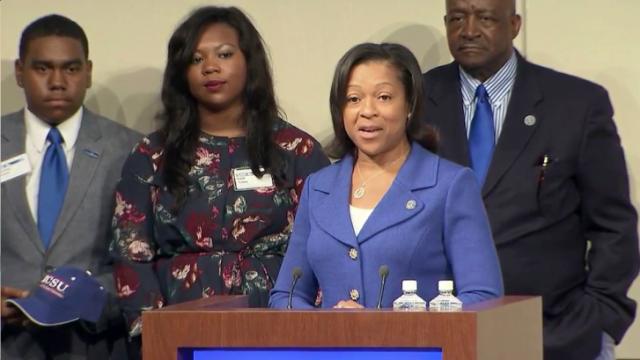 Elizabeth City, N.C. — The chancellor of Elizabeth City State University put in her resignation Monday, 15 months after she was hired to fix the financial difficulties and declining enrollment that have plagued the school in recent years.

Chancellor Stacey Franklin Jones will work through Dec. 31, and Thomas Conway, vice chancellor and chief of staff at Fayetteville State University, will then take over as interim chancellor.

Over the last five years, Elizabeth City State enrollment has dropped by more than 50 percent and state appropriations and tuition revenue have declined by 21 percent. State lawmakers last year considered closing the campus, but they provided $3 million in short-term stabilization funding this year.

The historically black university has struggled with tougher minimum admissions standards for the University of North Carolina system, state budget cuts during the recession and operational deficiencies, UNC officials said. The chancellor who preceded Jones resigned in 2013 amid a state investigation into how the school handled sexual assault cases on campus.

Jones, a mathematician and systems engineer who had worked as a technology management consultant, was brought in to right the ship, and she promised at the September 2014 Board of Governors meeting during which she was hired to make Elizabeth City State a national model for affordability and academic success.

"ECSU is an important and essential institution to the University of North Carolina system," Board of Governors Chairman Louis Bissette said in a statement. "The board is committed to working with Dr. Conway, the ECSU leadership team and our system partners as we work with the ECSU community, as well as with business and legislative leaders, to ensure the future success of Elizabeth City State University."

The Board of Governors is expected to consider naming Conway permanent chancellor at its January meeting, officials said.

Before joining Fayetteville State’s leadership team in 2008, Conway served as dean of undergraduate academic programs at N.C. State. He also has served in several other administrative posts at N.C. State.

"Over a career that spans four decades, Thomas Conway has distinguished himself as a top-notch academic administrator. His extensive experience, integrity and sound judgment make him well qualified to provide strong leadership for ECSU during a critical time of change and beyond," UNC President Tom Ross said in a statement.