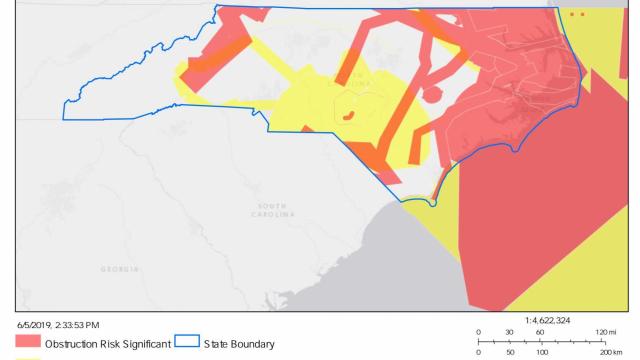 Raleigh, N.C. — A proposed ban on new wind farms in much of eastern North Carolina re-emerged at the statehouse Wednesday but shrunk to a three-year moratorium instead of an indefinite one.

Senate Bill 377's sponsors said they hope to not even need that, noting conversations are going on to scale back legislation that will ultimately pass.

"We don't intend to have a moratorium at the end," Sen. Jim Perry, R-Wayne, said. "We're asking everybody to take a leap of faith here."

For years, some North Carolina legislators have sought to block the construction of wind farms near military bases and in the corridors pilots use for training. Moratorium supporters say windmills pose a danger to aviators and could hurt the state the next time the federal government considers closing bases and merging missions around the country.

An 18-month ban was approved two years ago, but it expired at the end of last year.

The three-year ban, in areas where the state considers the obstruction risk significant, cleared the Senate Finance Committee Wednesday. It's keyed to a map the state produced identifying hundreds of square miles that would be off limits.

Most of that land is in eastern North Carolina, but the no-build zone extends into the Piedmont, and there's a swath in the western part of the state as well.

The bill has two more committees to go, but it could be on the Senate floor early next week. It would need House approval, too, and would be subject to veto from the governor.

Gov. Roy Cooper signed the last wind farm moratorium, but it had been tacked onto a broader bill on renewable energy that, among other things, aimed to boost the state's solar energy industry.

Cooper called the moratorium language "ugly" at the time but said the rest of the bill was important enough to merit his signature.

At the moment, this year's moratorium is a stand-alone bill.