Early voting ends on Halloween, more than half of NC voters have already cast ballots

The benefit to voting early is that you can vote at any early voting site in your county. If there's a long line at one polling site near you, you can always drive to another one. But, on Nov. 3, you have to vote at your designated voting precinct. If instead you're planning on voting on Election Day, check your registration status online and see which voting precinct you will need to go to.

Polls will be open in Durham and Wake counties from 8 a.m. to 7:30 p.m. on Friday and from 8 a.m. to 3 p.m. on Saturday. To see what site is closest to you, search North Carolina's one-stop voting site map.

The last few days of early voting are historically the busiest.

About 55 percent of registered voters in North Carolina have already voted either through in-person, early voting or by mail. More than 4 million total ballots have been cast so far statewide, and the 3.1 million from early voting already tops the total from 2016.

Nearly a quarter of registered voters didn't vote in 2016, according to State Board of Elections figures. 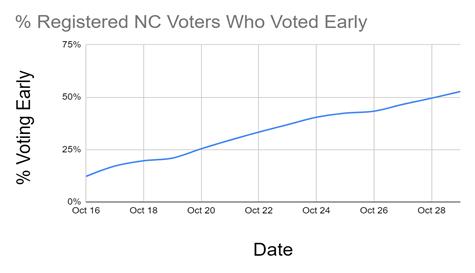 “Early voting is consistently the most popular form of voting in North Carolina, and 2020 appears to be no different,” said State Board of Elections Executive Director Karen Brinson Bell. “If you wish to vote early, we encourage you to find a site and time that works for you between now and Saturday.”

This year many more voters are opting to mail in absentee ballots. Over six times as many absentee ballots have been processed when compared to the same point in the 2016 election. 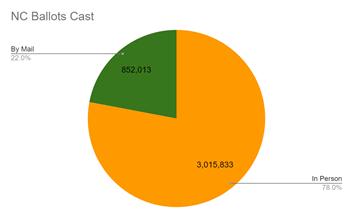 According to the State Board of Elections, voters who have requested and received an absentee ballot may deliver it to any early voting site in their county. However, on Election Day, polling places cannot accept absentee ballots, but they can be hand-delivered to the county elections office.

Here's how voters can vote safely this election season

Ballots that are mailed must be postmarked by Election Day, Nov. 3, to count.

Voters who requested an absentee ballot but have not yet received one will need to vote in-person or during early voting on Election Day. After voting in-person, they are to discard the mail-in ballot.