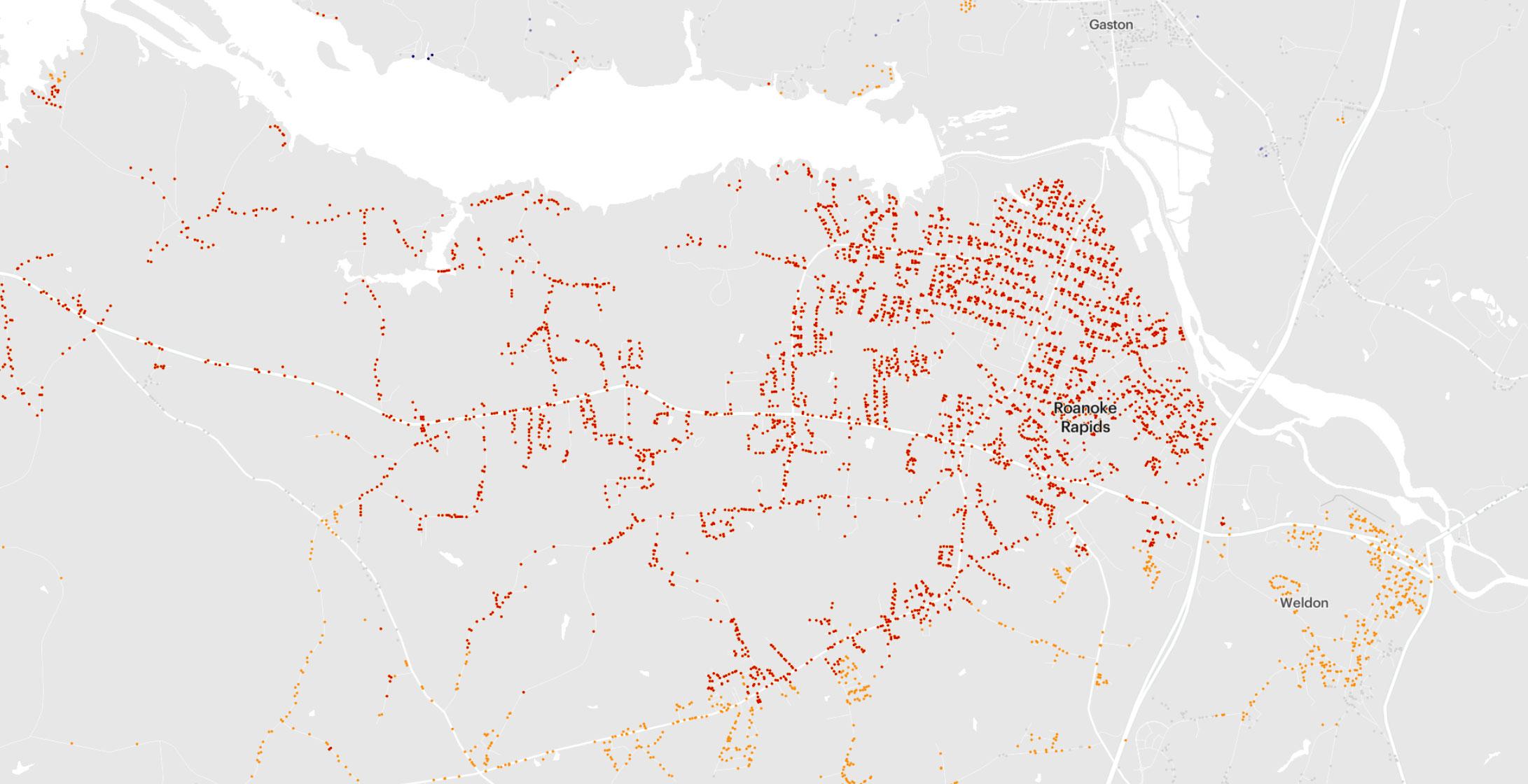 Raleigh, N.C. — When a last-minute measure to standardize the hours for early voting wound its way through the legislature during the final days of session earlier this year, opponents worried aloud that the move would be a heavier burden for cash-strapped counties.

They were right, according to a detailed analysis of early voting locations conducted by WRAL News.

The bill – passed in less than 40 hours along party lines, vetoed by the Democratic governor and subsequently overridden by the Republican super-majority in the legislature – requires early voting locations in each county to be open uniformly from 7 a.m. to 7 p.m. on weekdays. Republican lawmakers said the changes were important to ensure consistency within counties, cut down on voter confusion and expand hours for casting ballots.

Democrats said the measure means counties can no longer save money by varying available hours based on demand in their communities, allowing them to open additional sites for voters.

Most voters didn't see much of a change in the length of their drive to the polls.

But WRAL's analysis found voters in poor and rural counties are disproportionately farther away from their nearest early voting location in 2018 than they were in 2014, compared with voters in urban and wealthier counties. Although voters overall are, on average, slightly farther away from their nearest polling place this election season, a greater percentage of white and Republican voters than other parties and racial groups now have farther to travel.

The analysis doesn't account for differences in how people travel to their polling places – walking or taking public transit might be drastically different even for small changes in distance. But it does provide some insight into a factor that political scientists say can have at least small impacts on turnout, which can matter in tight races.

It's unclear, however, whether those effects will be outweighed by vastly expanded voting hours and what appears to be a highly motivated electorate.

"For a lot of folks, the major argument about moving sites was about disproportionately affecting discrete populations of voters. Could it be based on race? Could it be based on party affiliation?" said Michael Bitzer, a professor of politics and history at Catawba College who reviewed WRAL's findings. "What some of these numbers tend to show, at least in terms of the aggregate, is that it could be in other ways that we hadn't thought about."

A WRAL analysis found that voters in poor and rural counties are disproportionately further away from their nearest early voting location in 2018 than they were in 2014, compared to voters in urban and wealthier counties. And although voters overall are, on average, further away from their nearest polling place this election season, white and Republican voters appear to be impacted slightly more than other parties and racial groups. The analysis focused on the 70 counties that saw at least some change in the locations of early voting sites. View the full map

WRAL News used early voting locations for 2018 and 2014, as well as voter registration data, to gauge the potential impact of changes for the midterms.

We used the Openrouteservice to generate isochrones – map shapes used to determine driving distances – for each early voting location. Database software then generated mile values for each isochrone intersecting each voter, by county.

More on this project:

Early, or so-called "one-stop," voting allows people to vote at any early-voting site in their county, instead of at a specific precinct.

As a result of the new law, the number of hours available statewide to vote early at one-stop locations nearly doubled from 2014. Total early voting hours increased in all but six counties: Henderson, Bladen, Stanly, Polk, McDowell and Halifax.

But the total number of early locations dropped by about 17 percent statewide. In all, 43 counties lost at least one voting location. Two counties – Henderson and Buncombe – lost four.

That matters, because political scientists say distance from a voting location can have at least a small effect on turnout.

"Certainly, if somebody is impacted by having to go an extra mile, 2 miles, 3 miles, that could have an impact in terms of being a participation cost for the average voter that they may not have had in 2014," Bitzer said.

To test how those distances changed, WRAL used state elections data to calculate the difference in driving distance to each voter's closest early voting location in 2018 and 2014.

The vast majority of voters saw only minor changes in their closest early voting location – the site was between 1 mile closer or farther away.

About 14 percent of Republican voters saw changes of more than a mile, a higher proportion than any other political group. By raw numbers, however, almost 279,000 Democrats were affected versus about 265,000 Republicans. The average change in distance was also a fraction of a mile more for Republicans than for Democrats.

Voters more than 1 mile farther away in 2018

But poor and rural voters, in particular, saw outsized impacts compared with their urban and wealthier counterparts.

The effect is even more pronounced for voters in the state's poorest counties, where one in four are now more than a mile farther away. That's three times the rate for voters in wealthy counties.

Voters more than 1 mile farther away in 2018

Rep. Marcia Morey, D-Durham, said this possibility was what concerned her as the bill moved forward in June.

"It took away flexibility from local boards," Morey, who reviewed WRAL's findings, said. "I think it really hurt, especially in places where boards of elections couldn't staff."

Republican leaders, however, counter that the marked jump in available days and hours – which climbed from 25,887 to 49,696 – more than make up for the decreased number of sites.

"It doesn't take into account that we now have more opportunities to go to the polling site," said Sen. Ralph Hise, R-Mitchell, who reviewed WRAL's findings. He said rural voters, in particular, drive more for their jobs or for essentials like groceries. "These additional hours allow us to pair those things."

Hise also pointed to the now historic levels of midterm early voting turnout as proof that the extra one-third of a mile the average voter now has to travel to a polling place – the equivalent of about 600 yards, he said – has had a minuscule impact.

"We've had to deal with these ridiculous conspiracy theories from the beginning about how we're trying to restrict early voting," Hise said. "I think the turnout has shown how far from reality those claims are."

Kristin Scott, director of the Halifax County Board of Elections, isn't so sure.

In her county, where the number of sites dropped from three sites in 2014 to one in 2018, the average voter is 6 miles farther away from an early polling place this year – the highest change in the state. Total voting hours there also decreased, from 128 to 116.

"Even though we've noticed an increase in voting during the early voting, the turnout could probably be higher if we had additional sites," Scott said.

In 2014, Halifax County opened its sites for the last week of early voting instead of the whole period. That brought costs down to $3,000 per site. But the new law meant that every site would cost a minimum of $24,000 – not including training or overtime.

"We are a nice-sized county, but we're extremely rural, and funding has always been an issue looking at elections," Scott said.

By the time the bill became law, she said, elections officials didn't have the time to ask county leaders for more money to expand the number of sites.

"It's very frustrating because we know the need, we know how the county operates – but there's just no way we can help," Scott said.

It's clear to her, though, that voters are more motivated to show up this year than in other midterms, especially with more contested races and six proposed constitutional amendments on the ballot.

Factors like these will likely have a bigger impact on turnout than distance as voters continue their surge to the polls, political scientists say.

"Regardless of convenience or inconvenience, you need to be motivated and interested," James Gimpel, professor of government and politics at the University of Maryland, said. "After all, we do know people who live right across the street from a voting location, and they don't vote."

But motivation's not an easy thing to change. So Gimpel said research and public policy has largely focused on increasing convenience – like more hours and closer locations.

"If we figured out a surefire way of increasing people's motivation 10, 12 points, that's where we should be focusing," Gimpel said. "But that's the problem: We haven't figured out how to leverage motivation."

Voter Guide: Who's on the ballot, how, where, when to vote in NC 2022 primary election

Distance in particular, says University of Pennsylvania's Marc Meredith, is all about context: A half-mile means something different to someone walking than someone jumping in a car. But it does matter.

"We know this can have an effect," Meredith, an associate professor of political science, said. "It tends to be pretty small."

What can throw a voter off more than driving distance, Meredith said, is when a site moves at all – even if it's closer.

"Routines can form pretty quickly," Meredith said. "What's most salient in people's minds is: What did I do last time?"

The actual impacts of slightly longer travel times for some voters will be hard to predict, especially with turnout looking more like presidential years than midterms. Bitzer said the large turnout we're seeing during early voting may mean smaller lines or just the opposite, as people who saw their early voting sites close fall back on their neighborhood precincts on Election Day.

"We just don't know until after the fact here," Bitzer said. "I'm hesitant to say there's going to be definitiveness about early voting because we are in such uncharted territory."