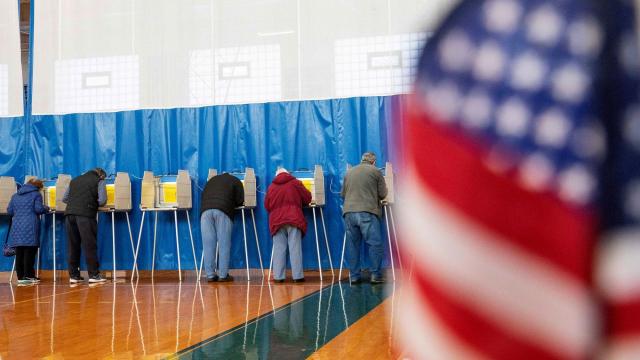 Biden won a majority of black voters in states across the South, like Virginia, North Carolina, Alabama and Tennessee, and handily defeated Sanders among older and more moderate voters there. Black voters had propelled Biden to victory in the South Carolina primary on Saturday.

The 415 delegates at stake in California make up more than 10% of all the delegates available nationwide in the entire primary season.

Biden's strength among older voters and more moderate voters showed across the South. He won three-quarters of voters over 65 years old in Virginia and Alabama, and a majority of that age group in North Carolina. In both Virginia and North Carolina, Biden handily won voters whose biggest priority is to unite the Democratic Party, with almost two-thirds of that group supporting him as the nominee in both states.

Biden also drew large majorities of those who want a rewind. Around half of voters in Virginia, North Carolina, Tennessee and Alabama said they wanted to return to the policies of former President Barack Obama, and Biden won three-quarters of those voters in Virginia and Alabama, as well as nearly six in 10 of them in Tennessee and North Carolina.

Still, in California, Sanders won more than 7 in 10 voters under age 30, and he won liberal voters by a nearly 3-to-1 margin over Biden. A majority of California Democratic primary voters called for an overhaul of the economic system in the United States, expressing support for single-payer health care and free college. A majority said they had a favorable view of socialism. Biden, however, continued to show strength among older voters in California, winning voters over 65 by a 2-to-1 margin.

Sanders won his home state of Vermont by a broad margin thanks to support among liberals and young voters, winning about seven in 10 of each group. He also won Colorado, earning the support of a majority of very liberal voters. Sanders had also been leading in pre-election polls in the delegate-rich state of California.

Here's what else the exit polls tell us.

Around half of Minnesota voters decided who to support in the last few days -- and half of those went for Biden, a sign that he benefited from home Sen. Amy Klobuchar's decision to drop out of the Democratic on Monday.

A tight race in Texas

As in other states, exit polls show black Democratic primary voters in Texas heavily favored Joe Biden, with roughly 6 in 10 supporting the former vice president -- but blacks make up only about a fifth of the Texas electorate.

Sanders, on the other hand, drew more than 4 in 10 Hispanics, who account for just under a third of the Texas primary electorate.

Voters in the Lone Star State also split by age group, giving Biden a way to make up the difference. He was heavily favored by voters over 45, who made up about two-thirds of the Democratic electorate, while those under 45 went for Sanders.

Democratic voters focus on how to beat Trump

As in early Democratic nominating contests, majorities of Democratic voters in every Super Tuesday state said they would prefer a nominee who can beat Trump over one with whom they agree on the issues.

South Carolina has been the lowest state where exit polls have been conducted to prioritize beating Trump over agreeing on the issues, 53% who want a nominee who can beat the President in November. Deep red states still have a majority who prefer someone who can beat Trump, like in Alabama, Oklahoma, and Virginia where around 3 in 5 say so.

Colorado and Texas exit polling finds a majority of Democratic voters in both states would rather nominate a candidate who can beat Donald Trump over someone who agrees with them on the issues, around 7 in 10 in Colorado and 6 in 10 in Texas.

Health care was the most important issue to Democratic primary voters in Maine and Massachusetts, according to early exit polling from CNN.

Almost half of voters in Maine and 2 in 5 in Massachusetts and Virginia said health care was the most important in deciding who to vote for, followed by around a quarter in those three states for climate change. A quarter in Virginia chose income inequality, compared to around 1 in 5 in Maine and Massachusetts. Fewer than 1 in 10 voters chose race relations in all three states.

Health care has dominated the Democratic field, with Sen. Bernie Sanders championing "Medicare-for-All," which would replace private insurance with a government plan, with moderates including Biden favoring the expansion of a public option within the existing private insurance system.

Almost three quarters of voters in Maine and around half in Massachusetts and Virginia support replacing private insurance with a single government plan.

The Democratic primary electorate in South Carolina, which voted on Saturday and was the first Southern state to cast ballots in the primary, included 55% black voters, according to the CNN exit poll there. Black voters were key to Biden's success in that state.

Looking for an overhaul of how the economic system works

Inequality, which has been a major issue throughout the campaign, emerged as a major fissure for voters.

Voters choose between bringing needed change and uniting the country

In Alabama, more want a candidate that can bring about needed change, while another third want someone who can unite the country. Slightly less than 3 in 10 prefer someone who cares about people like them.

The share of voters who are angry at the Trump administration ranges from about half in deep red states, but climbs to a big majority in more liberal places.

Voters across the US are angry about the President Trump's administration, almost 8 in 10 who say so in Maine, 3 in 5 in North Carolina, and a little over half in Alabama, according to early exit polling. Around 3 in 10 Democratic voters are dissatisfied in Alabama, a quarter in North Carolina, and around 1 in 7 in Maine. Few, around 1 in 10, are enthusiastic or satisfied in each state.

Ideology in the Mid-Atlantic

The two Super Tuesday states appear significantly more liberal than South Carolina's electorate, according to these preliminary results. A majority of voters in each state described themselves as liberal in the early exit poll. In South Carolina, it was 47%.

CNN exit polls were conducted by Edison Research for the National Election Pool in 12 states voting on March 3. Results are based on interviews conducted throughout the day with randomly selected Democratic primary voters at voting locations in Alabama, California, Maine, Massachusetts, Minnesota, North Carolina, Oklahoma, Tennessee, Texas, Vermont and Virginia.

In California and Colorado, telephone polls were conducted to interview those who vote by mail. In North Carolina, Tennessee and Texas, exit polls were conducted among randomly selected voters at early voting locations during the early voting period. Error margins vary by state, ranging from plus or minus 7 percentage points to plus or minus 4 percentage points.

Results of early exit polls can shift as interviews with those who voted later in the day are incorporated into the results, and these numbers may change.