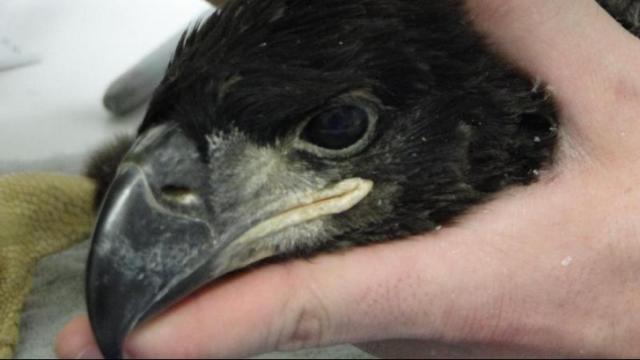 Huntersville, N.C. — An eaglet that survived a 60-foot fall from its nest near Jordan Lake died Sunday at the Carolina Raptor Center in Huntersville. Veterinarians tried to save the bird after another eaglet died in the fall.

The eaglet arrived at the center with a fractured leg, and, over the last few days, doctors discovered additional injuries that made the bird's condition more dire.

"We discovered an open fracture of the left humerus today. It was very close to the elbow joint (wing). We took him to surgery to attempt to repair it, but we were not successful," Dr. Dave Scott wrote on the raptor center's Facebook page.

"In this case, we decided to euthanize the bird as he had multiple other serious issues including a fracture."