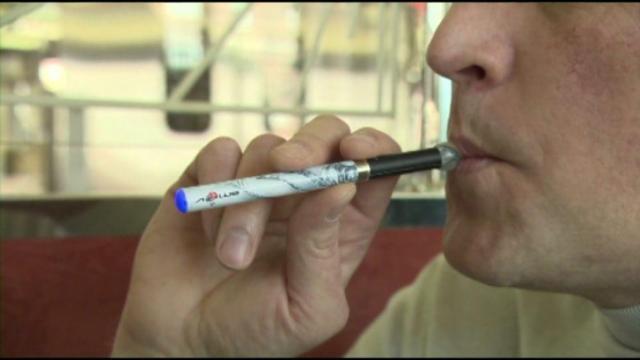 Two years ago, a friend introduced him to an alternative – electronic cigarettes. He switched, and he was surprised by the results.

“A whole bunch of senses started coming back,” Makam said. “I could smell things I couldn’t smell before. Food tasted better, in the fact that I got my taste buds back.”

Makam started E-Cigs Store and Vape Lounge, a small shop in Cary with what he says is one of the largest selections in the area. His store is stocked with flavors such as grape Pez, classic butterscotch and citrus fruit punch.

E-cigs are the latest craze to light up the smoking industry. The battery powered unit uses a small tank to hold a liquid combination comprised of nicotine, flavoring and other chemicals. The mixture is instantly heated into an inhalable vapor that is relatively odorless.

Makam said he feels that he’s doing more than just selling merchandise. He’s helping customers understand that making the switch could be a tool in the battle to control their nicotine addiction.

"I have a client who smokes, that was smoking four packs a day for 40 years," Makam aid. “She’s no longer smoking that, and she’s come back several times and thanked me personally.”

Stories like Makam’s are the driving force behind industry sales of e-cigs, which reached $500 million in 2012. This year, profits are expected to surpass $1.5 billion. The figures are small compared with the $100 billion that tobacco industries rake in each year. However, it reflects the explosion in popularity of e-cigs within just a few years.

The changes have consumers flocking to stores, tobacco heavyweights such as R. J. Reynolds entering the game, and health officials urging caution.

Sally Herndon, head of the North Carolina Department of Health’s Tobacco Prevention and Control Branch, says there isn’t enough research to support the use of e-cigs as a smoking cessation device.

It’s illegal to market the product as a stop-smoking aid because it doesn’t have approval from the Food and Drug Administration, she said.

“Because they aren’t regulated, you’re not getting the same product across the United States,” she said.

Her main concern is the unknown health risks.

“This is a relatively new phenomenon, and there is research going on right now about the product’s safety,” she added.

Herndon says that without the data, she doesn’t support e-cigarettes as a healthy alternative. Makam says he has all the data he needs.

"Stand here for just an hour and hear the actual testimonies of the people,” he said. “Their success stories - it’s motivating for us.”