Durham, N.C. — An boy scout built a garden in Durham to carry out a message of world peace and call for an end to gun violence.

Shaun Deardorff, 18, is a senior at Jordan High School. He said the garden, built in the grassy center of a roundabout in Campus Hill Park, is more than an Eagle Scout project.

"It looked like there had to be something inside of it," Deardorff said. "It's calling for something to be inside."

Deardorff designed a sculpture, and his project mentor, Joseph Lemmens, fabricated the design into a 3-dimensional, 15-foot tall aluminum symbol for peace. 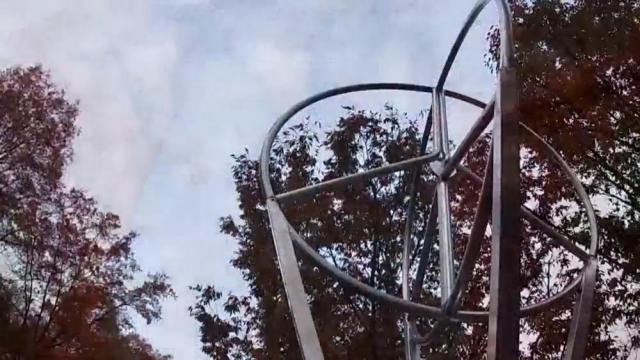 "I knew I wanted to create some type of memorial for those who had fallen due to gun violence and other violence in the community -- the nation and internationally," Deardorff said. "It has a heart in the middle that symbolizes love is the cornerstone of peace."

Deardorff hopes his world peace garden will spark change in a generation that has experienced too many horrors of violence.

It took two weeks for Deardorff and about 45 volunteers to build the memorial.

Last week, Deardorff said, a student threatened to shoot up his school.

"It's just really sad we have to fear our safety in public institutions," he said. "This is kind of a way to commemorate those who have fallen and then a way to create a catalyst for change for people to help stop this gun violence that's in our community."

A simple message of peace and love is spelled out in several languages around the sculpture including Russian, Japanese, Vietnamese, German and Arabic.

Deardorff is awaiting a board review to earn his Eagle Scout badge, the highest rank in scouting.