Durham, N.C. — A North Carolina Central University student was arrested Tuesday in connection with a Monday night protest in which a Confederate statue in front of Durham County's former courthouse was pulled down.

Takiyah Fatima Thompson, 22, was charged with participation in a riot with property damage in excess of $1,500 and inciting others to riot where property damage exceeds $1,500, both felonies, as well as damage to real property and disorderly conduct by injury to a statue, both misdemeanors.

Thompson used a ladder to scale the podium on which the Confederate Soldiers Monument had stood since 1924, then climbed the statue and wrapped a strap around it so other protesters could pull it down.

Thompson was given $10,000 unsecured bond and is scheduled to appear in court Wednesday morning. 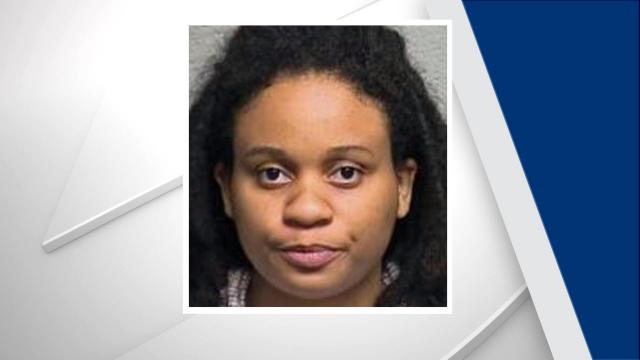 Durham County Sheriff Mike Andrews said Tuesday that his deputies were working to identify others involved in the incident and plan to pursue felony charges against them.

"Let me be clear, no one is getting away with what happened. We will find the people responsible," Andrews said during an afternoon news conference. "We can all agree yesterday went too far. Yesterday was not the Durham that I know."

Some protest organizers defended their actions Tuesday, calling the monument a symbol of oppression and racism.

"I'm tired of white supremacy keeping its foot on my neck and the necks of people who look like me," Thompson said at a separate news conference. "That statue glorifies the conditions that oppressed people live in, and it had to go."

Thompson and several other protesters said they are part of the Durham chapter of the Workers World Party. According to their website, they are a"revolutionary socialist organization, engaging in struggles for the working class and the oppressed".

"We know that after Charlottesville and all of the racist incidents beforehand, all of the police killings, we are at war. This is war," said Loan Tran with the Workers World Party.

Andrews called the protesters' actions "a blatant violation of the law," but he said no one was arrested during the demonstration because officials worried about injuries in the resulting chaos.

"Don't mistake restraint for inaction," he said. "Had I ordered my deputies to engage a hostile crowd, there would have been serious injuries. Statues can be replaced; lives cannot."

The sheriff's office took steps before the protest to minimize problems, he said, such as blocking off streets, spraying the statue with solvent so that any attempt to deface it could be easily cleaned and using uniformed and plainclothes deputies to maintain order in the crowd.

Durham County Manager Wendell Davis said the protest began as a peaceful gathering in response to the weekend clash between white supremacists and counter-demonstrators in Charlottesville, Va., that left one person dead and 19 others injured. The Durham protest quickly devolved, however, into "an unfortunate outcome," Davis said.

"Regardless of what this monument memorializes in our history, the destruction of this figure was unlawful, and it represented an inappropriate action," he said. "There is a lawful way to gain the attention of our state to address the desire to move, remove or make substantive changes to a public monument."

State lawmakers passed legislation two years ago to restrict the removal of Confederate monuments after Charlotte officials voted to remove a memorial downtown. Now, lawmakers or the North Carolina Historical Commission must approve any local effort to move or alter any such memorials.

Lawmakers said North Carolina needed to protect its Confederate history from those who object to it. But Fitzhugh Brundage, the William B. Umstead Professor of History at the University of North Carolina at Chapel Hill, said history isn't in any danger of being rewritten.

Gov. Roy Cooper called Tuesday for the repeal of the 2015 law to leave the decision on moving Confederate monuments up to local communities. He also asked the state Department of Natural and Cultural Resources to determine how such monuments could be moved from state property, such as the Capitol grounds, and be placed in museums or at historical sites where they could be studied in context.

"My first responsibility as governor is to protect North Carolinians and keep them safe," Cooper said in an online post. "The likelihood of protesters being injured or worse as they may try to topple any one of the hundreds of monuments in our state concerns me. And the potential for those same white supremacist elements we saw in Charlottesville to swarm the site, weapons in hand, in retaliation is a threat to public safety."

"Every day that these monuments to white supremacy remain standing on North Carolina’s public land, our government sends a message that it endorses the oppression and inequality that they represent," Karen Anderson, executive director of the state chapter of the ACLU, said in a statement.

Brundage noted that many of the monuments, including the one felled by the Durham protesters, were mass marketed to civic groups and have little historical value.

"There were catalogs of Civil War commemorative sculpture in the late 19th and early 20th century, and you'd flip through it and say, 'We have this much money. That one looks good,' and you'd order it from a Northern foundry. They'd ship it down on the railroad, and you would erect it," he said. "So, these are not great works of sculpture by noted artists."

Battlefields and military cemeteries are more appropriate sites for Confederate memorials, Brundage said, adding that he understands but doesn't condone the actions of the Durham protesters.

"If you’re a private citizen and want to go to the courthouse, you may find it offensive that you have to pass in front of a Confederate monument," he said.

Some Durham residents said Tuesday they were appalled by the protesters' actions, saying opposition to what the statue represents should have been handled differently.

"When you get out on the streets and start showing that foolish behavior, it really makes you look like a fool. If you want to talk and protest, talk and protest and actually make some sense," Gregory Lunsford said.

"I’m glad it’s no longer there, but the process that they went through to take it down probably was not the right way, the right approach to do it," Anthony Bond said.

Durham County officials have experts examining the statue to determine the extent of the damage, Davis said, adding that officials also plan to meet with the state Historical Commission about the statue's future.

"I cannot emphasize enough the importance of all of our citizens exercising civility as we work collectively to be the peaceful community that we all desire," he said.

"The men and women of my office have a difficult job, which is why I am calling on our city and county leaders to send a clear message to protesters in this community: It is time for some ground rules," he said. "We must make clear what is acceptable and what is unacceptable behavior."