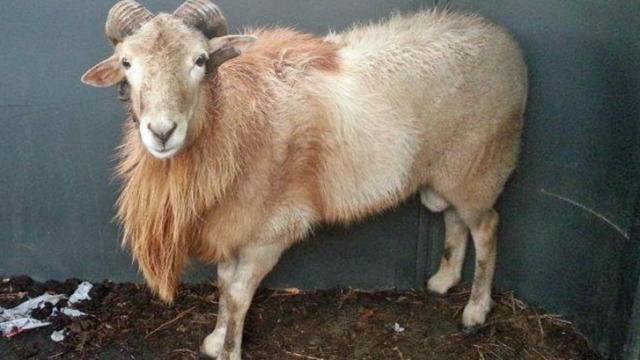 Durham, N.C. — Law enforcement agencies often sell off used equipment to put money back into public coffers, but the Durham County Sheriff’s Office is offering something a bit more unusual than an old patrol car.

The department on Friday will hold an auction to sell an impounded ram named Bubba.

Bubba was first spotted several months ago, wandering in the area of Odyssey and Silver Star drives. Deputies tried and failed to catch him, so they decided to let the ram roam as long as he wasn’t causing problems.

But Bubba took up residence near some homes on Glover Road and began damaging windows, doors and other reflective objects. Apparently, the ram was head-butting his own reflection. Deputies said he caused about $5,000 damage to one vehicle and home.

The ram’s odyssey came to an end Dec. 10, when deputies finally lured him into a custom-built pen that they stocked with fresh apples, oats and other delectables.

Bubba was taken to Elodie Farms in Rougemont, where he’s been ever since.

“Neither snow nor rain nor freezing cold temperatures shall prevent the auction of Bubba tomorrow,” said Deputy Paul Sherwin, spokesman for the sheriff’s office.

There’s no minimum, and the bidding will open at zero, Sherwin said. Money from the sale will reimburse the owner of Elodie Farms and the county for the cost of Bubba’s boarding and veterinary bills, including care for an ingrown horn.

“If Bubba sells for more than $800, the remaining funds will go to Durham Public Schools, as required by law,” he said.