Durham's 'can opener bridge' being raised

Durham, N.C. — The Durham bridge so famous for catching tractor-trailers that it earned the nickname "can opener" will be raised 8 inches in hopes of limiting some of those accidents.

The 11-foot-8-inch bridge formally known as the Norfolk Southern–Gregson Street Overpass has been through a lot. Countless truck drivers have underestimated their vehicles' height and gotten stuck, earning the bridge an extensive video legacy.

Jurgen Henn has been capturing the crashes from a camera outside his office since 2008 and cataloging them on YouTube. The bridge boasts a web site and a full write-up on Wikipedia.

"I started working at Brightleaf in 2002, and over the years, we noticed all these truck crashes. So, in 2008, I installed a home security system, and I thought it would be interesting to try to capture one of these crashes on camera," Henn said. "The interest was so great that I just kept rolling the camera."

He says his videos have been viewed more than 60 million times.

"There’s definitely a bit of a wow factor when people see what happens when a truck hits a bridge going 35, 40 miles per hour," he said.

Inside the Morgan Imports store right by the bridge, signs and T-shirts honor it legacy. "They fly out of here," a clerk said. 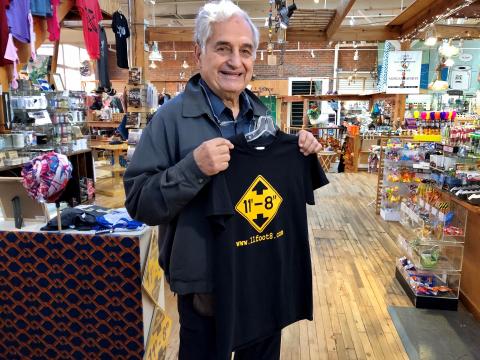 Henn has mixed feelings about the plan to raise the bridge by 8 inches.

"Emotionally, we are a little bit invested in 11-foot-8, the can opener," he said. "But really this has always been about raising awareness and improving safety around here. So in that sense, I actually feel like we’ve accomplished something that benefits the community."

"The additional 8 inches will maximize the increased clearance without affecting the grade of adjoining track on each side of the bridge. This is a $500,000 project that is funded solely by NCRR," Kessler said.

"We are working closely with the City of Durham on these projects, and we appreciate their collaboration regarding traffic management and temporary road closures."

Gregson Street under the bridge will be closed from Oct. 23 to Nov. 5. The actual work is scheduled for Oct. 29 and is expected to take about eight hours.