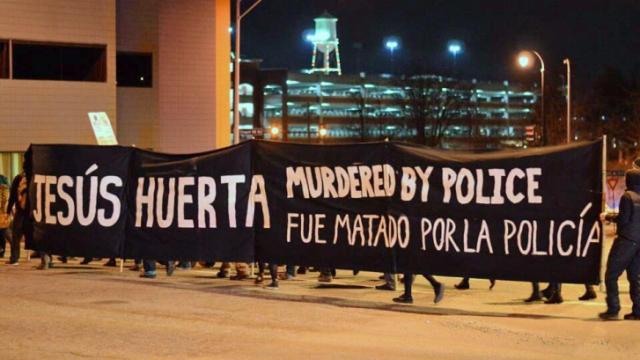 Durham, N.C. — A vigil planned as a peaceful remembrance of a teen killed in police custody ended with tear gas and arrests Thursday night in downtown Durham.

About 200 friends and supporters of Jesus Huerta faced off with law enforcement officers one month after the teen died of a gunshot wound while in the back of a police cruiser. By evening's end, several of them were in police custody.

Huerta, 17, was picked up Nov. 19 on an outstanding second-degree trespassing charge from July. Durham Police said he shot himself in the head after he had been searched, handcuffed and placed in the car. Since Huerta's death, his friends and family members have demanded a federal investigation into the Durham Police Department about his death and possible "patterns and practices" of civil rights violations within the department.

"Chuy is with us," said Huerta's sister, Evelin Huerta, using his nickname. "Our brother is always with us and will never leave our side."

Although the assembly was billed as a peaceful event, Durham police massed in riot gear, with tear gas masks on their hips and billy clubs in hand, even before Huerta supporters arrived. By the end of the evening, several were under arrest, although police did not say how many or what their charges would be.

Before the vigil turned ugly, Huerta's friend Brandon Moreno promised Thursday's march would not end in the vandalism that marked an earlier march. On Nov. 22, protesters broke windows at police headquarters on West Chapel Hill Street.

"No violence because his family got mad about that. There is going to be no violence," Moreno said.

The vigil began with candlelight, signs and flowers. Gradually it got louder, with participants shouting obscenities to the beat of a drum as they marched from CCB Plaza to the police HQ. There, officers held the line and protesters reversed course.

When they returned to CCB Plaza, the gathered people got "disruptive," Chief Jose Lopez said, and officers demanded that the crowd disperse.

“Our primary concern was to protect the public as well as the protesters. Some arrests were made and officers were forced to deploy teargas to disperse the crowd after rocks and bottles were thrown at the police," Lopez said.

“I couldn’t be more proud of the restraint and professionalism demonstrated by our officers tonight. This had the potential to be much worse,” he said.