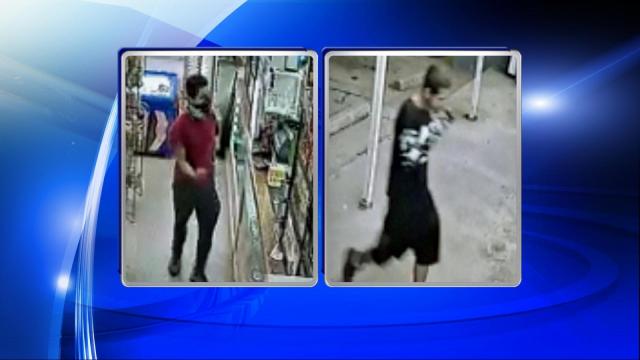 Durham, N.C. — Durham police are asking for help in identifying two men that they believe are responsible for a string of crimes in Durham and Wake County.

Authorities released surveillance video Wednesday of two men captured inside a Tobacco Plus Mini Mart at 2017 Chapel Hill Road on Oct. 7. Police said that the two men entered the store just before 10 p.m. and robbed the clerks at gunpoint. One man fired shots as they left the store, but nobody was injured, police said.

Durham police believe that the two men who were captured on camera are also responsible for three other crimes that occurred on Oct. 7.

At about 7:30 p.m., a woman was taking out her trash on the 1500 block of South Roxboro Street when two men in a small, white car pulled up next to her, got out and robbed her at gunpoint of her phone, cigarettes and other items, police said.

A half hour later, a woman was getting out of her car in a parking lot on the 3700 block of Southwest Durham Drive when a small, white car pulled up behind her. Two men robbed her at gunpoint of her purse and then told her to lie on the ground, police said.

Later that night, a woman who was in a parked car in the parking lot of a Hardees at 2721 Chapel Hill Road reported that a man who was armed with a gun tapped on her window. She blew her horn, scaring the man away, and he and another man fled in a small, white car, she told police.

Following the incident at Hardees, officers spotted a small, white car on University Drive and attempted to stop the vehicle. The driver refused to stop and a chase ensued until the car stopped near Old Chapel Hill Road and Scottish Lane, where two men got out of the car and fled.

The white car, which had been reported stolen in Garner earlier that day, had several stolen items and guns inside, said police.