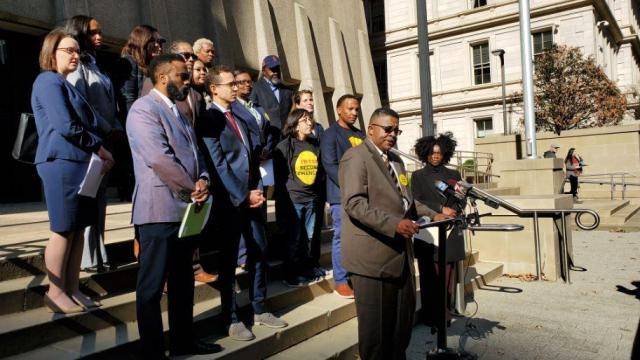 At age 16, Corey Purdie was convicted as an adult for a crime and spent eight years in prison. He was released in 2003, but his sentence didn't necessarily stop then.

"Upon being released, because of the period of time I spent in prison, I had not undergone any educational programs or things of that nature. So when I returned back to civilian life, I didn't understand, for one, how to re-engage back in society and number two, I had so many barriers against me because of my past convictions," Purdie said.

Checking the "have you ever been convicted of a felony?" box on job applications became a hurdle to finding sustainable employment for Purdie. At age 24, he was faced with a challenge that many formerly incarcerated people are confronted with — how to get a job that pays a living wage if no one will even consider you.

Additionally, he was struggling to find self-worth and find value in performing civic duties like voting. The system silenced Purdie for so long, he internalized it and felt his voice did not matter.

"While I was in the system, I kind of lost a lot of hope because of the system's punitive methods, the way the system is set up and the information that was put in my mind by correctional officers and the staff who said that I would never be anything," he said. "So upon release, voting wasn't on my mind."

Individuals incarcerated in North Carolina prisons do not have the right to vote, and when they are released, state felony disenfranchisement laws present further obstacles to voting.

Roughly 6.1 million Americans cannot vote because of a felony conviction, which is a population substantial enough to have a dramatic effect on elections.

Kathleen Roblez, a staff attorney for Forward Justice, a policy center in Durham, said there is a period of time during an individual's post-release where they are prevented from voting. While it may not have been on Purdie's mind in 2003, it certainly is now.

"Upon release, I thought I was free, but then I realized that I really wasn't free during my post-release timeframe," he said. "For those nine months after I got out, it was almost more terrifying than it was when I was in prison because of the constant threats that I was going to be sent back to prison. "

Purdie broke through his dark period and paved a path for himself, starting a car washing business, Miracle Wash, in 2007. As he grew this business, he provided employment opportunities for others who had been impacted by the criminal justice system.

In 2010, in an effort to address the barriers formerly incarcerated people face beyond employment, Purdie established his own nonprofit organization, Wash Away Unemployment. WAU strives to "alleviate the escalating problem of high unemployment for disadvantaged groups such as ex-military, ex-offenders, community youth and those on government assistance."

Purdie's work with WAU led him to the N.C. Second Chance Alliance, a network of people with criminal records, their family members, reentry service providers, faith-based organizations, and concerned citizens working to improve the lives of people with criminal records. Through his involvement with the N.C. Second Chance Alliance, he works to advocate for laws and policies that restore opportunities for justice-involved people.

Purdie is an individual plaintiff in one of the litigation cases Forward Justice is championing regarding voting rights.

"I started forming relationships with people and talking about the importance of voting and policy change. That's when I realized the importance of my voice," Purdie said. "Because of all the trauma, we as a directly impacted [formerly incarcerated] population really don't think our voice matters."

He added, "From there, I started getting heavily involved with the Second Chance Alliance and we started traveling around the state and collaborating with others about voter's rights. "

Forward Justice aims to help advance the rights of people like Purdie and describes itself as a "nonpartisan law, policy, and strategy center dedicated to advancing racial, social and economic justice in the U.S. South."

Forward Justice Deputy Director Ashley Marshall said the goal is to serve as a strategic partner for movements, grassroots organizations and coalitions advocating for social change.

"We try to think differently about how we can change detrimental policies that have a lasting impact as we work towards creating a more just and equitable community," she said. "We primarily do that by focusing on changing laws, policies, and practices that uphold racism with a focus on mass incarceration and ensuring a strong democracy, particularly in the south. The South leads in mass incarceration and, similarly, voter suppression is just as pervasive. We know that we can't change our society without addressing both."

As a black, formerly incarcerated man, Purdie feels the burden of society's perception of him, but he is now taking an active part in combating these stereotypes by helping others like him. It's this type of involvement that contributes to the core of what Forward Justice is and who it represents.

"We focus on organizing and base building because we see that kind of engagement is a way for people to be a part of the process and is the way for folks to be involved in reviving our democracy," Marshall said. "We see social movements as transformative, particularly in the South, because we know social movements have been the only thing that led to radical change. Additionally with social movements, we have folks who are directly impacted shepherding transformative ideas and values to fruition. It is folks who are directly impacted by poverty, criminal injustice disenfranchisement and voter suppression who lead these social movements, and we support their leadership."

Forward Justice is currently partnering with:

Marshall said the wisdom and vision of people like Purdie propel transformation forward.

Though Purdie's past has shaped him and his current work, it isn't the measuring stick by which his value and worth is determined.

"Just because you might've done something you weren't proud of once in your life, it doesn't make that the totality of who you are as a person. Particularly if those circumstances were born out of the need for survival, housing, food, clothes and supporting your family," Marshall said.

For Purdie and those with similar histories, disenfranchisement is a criminal sentence that often lasts long after they've left the prison grounds.

"Inhibiting our rights is almost like Double Jeopardy. I was sentenced to between 89 and 116 months in prison. I did the time. I thought I paid for my crime then," Purdie said. "When I came out, it was like taxation without representation because while I was on nine months post-release, I still had to pay taxes. And if I felt like someone who had mistreated my child was running for superintendent, I would have had no voice in participating in that election. "

"I'm an active member of society now, I'm participating and everything. I'm working, I'm paying taxes," Purdie continued. "It's important for people to have a space to share their voice."

Forward Justice is giving people like Purdie the megaphone.

"We have to restore some of the vision and the hope as we talk and think about what's possible in the South," Marshall said. "At the end of the day, even though someone may have spent time in jail or prison, they are still citizens of this country. People should still be able to exercise their right to vote because they're still living and participating in their communities. They're still paying their taxes. So why shouldn't they have a say in how they're being governed?"