Durham, N.C. — A community has rallied to help a Durham police sergeant who lost his Granville County home in a fire on Friday.

The flames started in a family member’s RV that was parked outside and quickly grew and jumped to Sgt. Dale Gunter’s house. Nobody was home during the incident, but the fire burned most of the upper level and back of the house and efforts to douse the blaze resulted in additional water damage

A neighbor called to tell Gunter his home was burning. When he arrived, he could do little more than watch it happen.

“My wife was crying and she said ‘We have no family close, what are we going to do?’ and I felt a hand on my shoulder and I turned around and it was a Durham police officer standing behind me,” he said. 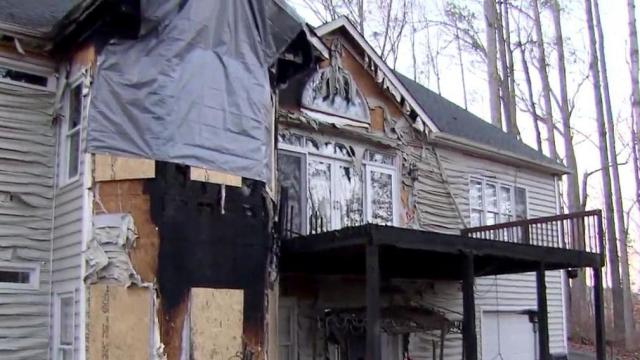 Gunter would soon find out that there were more people behind him than he realized. A fellow officer started a GoFundMe page to help the family rebuild and hundreds responded. The page has reached its $20,000 goal in just under three days.

“He wears his heart on his sleeve, but he covers it with a badge,” said Durham resident Cheryl Shiflett.

Shiflett remembers the day someone broke into her mother’s home and attacked her. Gunter was the first responder.

“He was taking a wet wash cloth and gently cleaning the blood off her face,” she said. “From then on, he was my number one hero.”

Shiflett is one of many who have been impacted by Gunter and want to return the favor.

For Gunter, all the donations are encouraging after the fire.

“When I looked at it, I sat down in this rubble and cried. It was, it is the most amazing thing,” he said.

Gunter has earned many awards with the Durham Police Department. He was recognized for saving the life of a man threatening suicide in 2010 and was named Officer of the Year in 2015.