Wake County, N.C. — A man wanted in connection with a slaying last summer and who was thought to be in a vehicle being pursued during a high-speed chase in Durham County yesterday was arrested Wednesday afternoon in Cary, authorities said.

Joshua McClain, 27, was apprehended by the FBI Safe Streets Task Force and was taken to the Durham County Jail, a Durham police spokeswoman said.

His arrest came hours after several law enforcement agencies, including the State Highway Patrol, the Durham sheriff's office and Durham police, conducted a massive search that unfolded Tuesday evening in the 1500 block of Sherron Road.

"I just thought it was a car accident," said Bethany Wheeler, who lives in the neighborhood where the search occurred. "I Googled it and saw it was a little bit more intense than that."

The sheriff's office initially identified the subject of that search as Joshua McClain, but hours later they said he was never part of that search and they actually were pursuing his brother, Jarrett McClain, 24, who had refused to pull over during an attempted traffic stop by law enforcement officers.

Authorities said Jarrett McClain fled from the scene and his vehicle reached speeds of up to 100 miles per hour in a 45 mile-per-hour zone.

The younger McClain appeared Wednesday in a Durham court, where the charges include assaulting an FBI agent, felony vehicle operation and attempting to elude a law enforcement officer.

Prosecutors said Jarrett McClain allegedly drove his vehicle in the direction of the agent, who had to jump out of the way to avoid being hit by the oncoming vehicle. He was being held on a $100,000 bond. 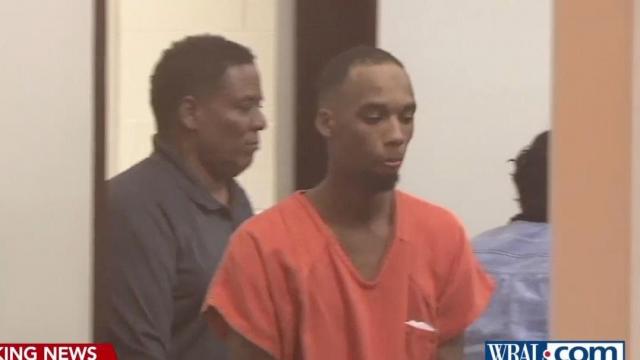 Also arrested after the search Tuesday was Kairi Fulwood, who faces less serious charges and who bonded out of jail.

Durham police said last year that Joshua McClain had been charged with murder in the death of Ly Teng Nhiayi, 32, of California.

​​​​Nhiayi's body was found inside a car parked in the 5000 block of Guardian Drive on July 26. The car was parked on a dead-end road near a wooded area that borders Interstate 40.

Autopsy results have concluded that Nhiayi died after he was shot.

Derrick Tyson, 40, of Bear Creek, and Reginald McClain, 28, and Walter Thorne-Price, 29, both of Durham, have been charged with murder. All three had been at the Durham County jail without bond.