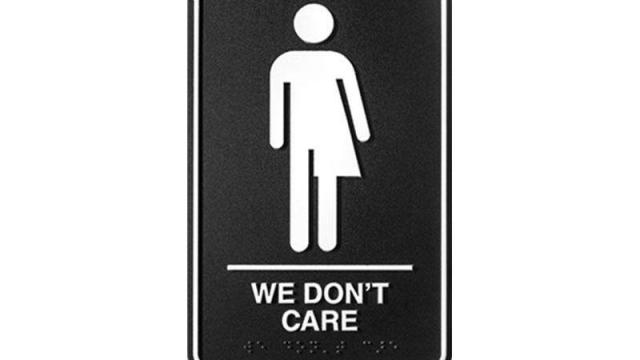 Durham, N.C. — A boutique hotel in downtown Durham has hung new signs on its public bathrooms in response to a controversial state law.

21c Museum Hotel, which opened a year ago and displays contemporary art throughout its lobby and public spaces, installed signs featuring a merged male-female silhouette above the phrase "We Don't Care" outside a bank of single-stall public restrooms in the hotel.

"The title refers to the position of ‘all are welcome’ or we don’t care where you go to the bathroom," 21c officials said on the hotel's website. "The installation gives the community another way to engage in conversation around this important issue. Thought-provoking contemporary art fosters dialogue and discovery."

The signs were created by Kansas City, Mo., artist Peregrine Honig, and each is signed and numbered, officials said.

House Bill 2, which was approved and signed into law in less than 12 hours last month, requires people to use public bathrooms that match their birth gender, excludes gay and transgender people from discrimination protections and bars cities and counties from extending such protections to them.

Private businesses are allowed under the law to set their own policies regarding bathroom use by employees and customers.

"It is demoralizing that sanctioned discrimination could be a cause contemplated, let alone endorsed, by public officials elected to represent a diverse and complete constituency," the statement reads. "We humbly stand with fellow North Carolinians who petition the repeal of House Bill 2."