Durham, N.C. — Hundreds of protesters marched through downtown Durham Saturday night, starting at the Durham County Justice Center. Protesters then made their way to the Durham Police Department, protesting against police violence toward the Black community and most recently the shooting of Jacob Blake in Wisconsin by police.

Demonstrations began at around 8:30 p.m. and remained calm at around that time. If you were in the area, you may have noticed that traffic was blocked and heard shouting. 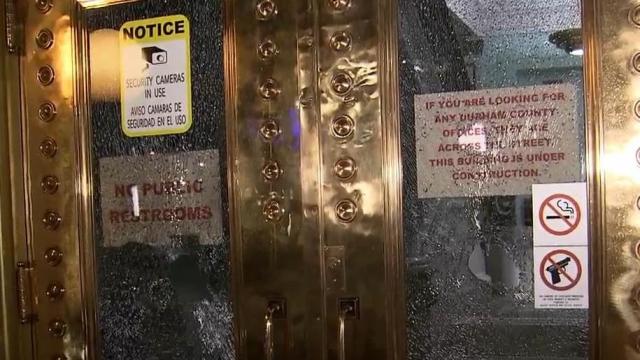 Then, at around 10:30 p.m., protests began to escalate. There was a group of about 100 protesters left still on the street. Durham, unlike Raleigh, did not have a curfew in place that night.

As it got later into the night, people started spray painting walls, breaking windows and setting fires in trash cans in downtown Durham.

Graffiti and vandalism was found at the Durham County Detention Center on Saturday morning. Messages like, "abolish" and "burn it down" were spray painted in protest against the criminal justice system and policing. Windows of the detention center were also shattered overnight. It appears that stones and railroad spikes were thrown at the detention center.

The Durham Housing Authority was vandalized with the phrase, "policing is genocide," and windows were smashed at the entrance of the Durham County Courthouse.

The Kress Building was tagged and windows were broken on Blackwell Street. On Main Street, the local business Tre Bella Bridal Shop was also damaged overnight.

At around midnight, it was mostly quiet in downtown Durham. It appears that there was a small group from the protesters that stayed behind and caused property damage.

At this time, it has not been made public that anyone has been arrested for vandalism.