Durham, N.C. — Some essential workers in Durham are painting "Black Lives Matter" in large, red letters at the intersection of Morgan St. and Rigsbee Ave. in Durham.

These workers are part of a nationwide strike in memory of George Floyd and other Black lives killed by police officers.

The nationwide strike, which began at noon, encouraged workers to walk away from their jobs for eight minutes — the amount of time prosecutors say a white police officer held his knee on Floyd’s neck.

At the protest, a kneel lasting that length of time took place in solidarity with the movement.

"I believe that was the longest eight minutes and 46 seconds that I've ever had in my life," said ally Mary Grace. "And I started crying." 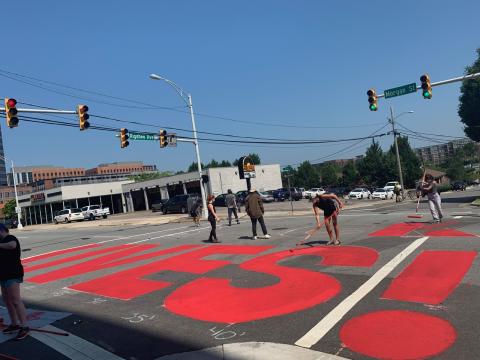 The group gathered at the McDonald’s at 102 West Morgan St.

Fast food workers, healthcare workers, those in the service industry, community leaders and racial justice activists are all expected to participate.

The nationwide protests are organized by Fight for $15 and a Union, a group that represents worker rights and pushes to increase the minimum wage.

"I've been in this city for 61 years and I've seen so much growth," said a woman known as 'Mama Cookie' to many. "But it's not benefiting the black communities or the brown communities. It's not fair. They're starving us. They're trying to push us all the way out, and we're not having it anymore."