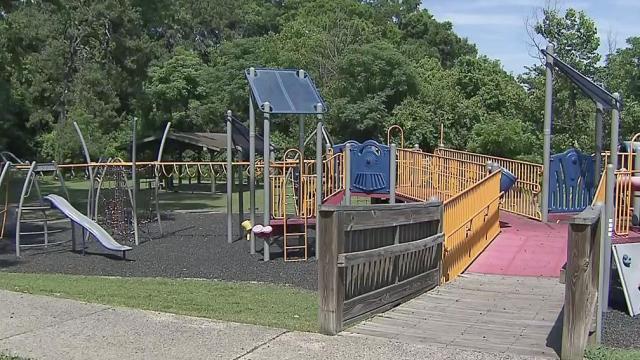 Durham, N.C. — The Durham City Council voted Monday to stick with their decision to remove only some of the tire mulch that covers the surface at the East Durham Park.

Parents in the Durham neighborhood are concerned for the health risks, calling the mulch a carcinogen. They were hopeful the council would allot more funding to remove all the mulch, but the request was denied.

In next year's budget, the city has allocated about $20,000 to replace the loose mulch but not the bonded mulch on one side of the park.

Officials with the City of Durham say they have tested the tire mulch that covers the ground and say it shows no certain risks, but Kristin Henry and Chloe Palenchar are two of the parents that believe it can cause cancer.

"We're talking about children. I don't want my children to grow up and have some cancer or other kind of health risk," said Henry.

Officials say the cost differential would have about $100,000.

"It's a huge risk that they're putting the children in our neighborhood in," Palenchar said.

Councilwoman DeDreana Freeman addressed the decision in an email to constituents.

“…As a council we voted to move ahead…on removing the loose crumble tire mulch as the bonded tire mulch as a whole is a larger issue. We will allow staff to continue to review as it is used in parks throughout the entire city," she said. "I agree that a review of materials used in our parks (has) warranted that funding.

"Please note the decision is with the council usually based on staff recommendation with input from residents and stakeholders in the city. Our City’s Parks and Recreations staff is trying to work in an equitable manner to address ongoing park maintain needs and that the removal of all of the bonded material ahead of schedule for one park is not equitable and could create some fiscal challenges…”