Rocky Mount, N.C. — At leastthree North Carolina counties were scheduled to open shelters Monday. However, the state is urging residents to use these as a last resort due to coronavirus concerns.

Duplin County was planning to open two shelters, but evacuees are asked to bring your their own bedding, food and other personal care items. Sampson County shelters would open if needed.

In Cumberland County, the Salvation Army was scheduled to open a shelter on Alexander Street. The capacity will be limited to 22 people due to COVID-19 precautions.

Anyone who seeks shelter will be screened for COVID-19, and anyone who shows symptoms will be isolated and separated from the rest of the shelter.

Fayetteville mayor Mitch Colvin declared a state of emergency Monday evening. It began at 7 p.m. and would run until conditions allowed it to expire.

Face coverings will be required while at the shelters.

AAA: Nearly half of North Carolinians wouldn't seek shelter from storm during pandemic

Counties along the Interstate 95 corridor are expected to be some of the hardest hit when Isaias drops heavy rainfall on the area Tuesday morning.

Rocky Mount Mayor Sandy Roberson says the city is preparing for not just for flash flooding, but high wind and tree damage as well.

He explains it’s still too early to tell how severe this storm will be, but preparation is key, especially since Rocky Mount is prone to flooding.

He says people should make sure they have enough water and food for at least the next 48 hours or until the storm has passed. He also asks that people stay indoors and away from windows.

"This is a dangerous situation, and just because we went through so many hurricanes in the past, every one is unique and presents lots of dangers. We shouldn't ever look over the potential impact it can have, so stay safe, stay inside and be careful as you are able to," said Roberson.

For now, the utility workers are on standby for any possible power outages.

Nash County Emergency Management director Brent Fisher said they were ready for whatever the storm may bring. 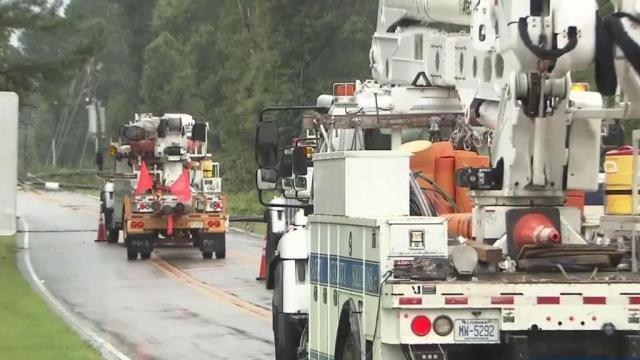 "Everybody is ready to go, and things are in order," Fisher said. "We just encourage to people that if they do encounter a downed tree, there may be some power lines entangled in the tree, so treat it as live until power companies are out. We don’t want anyone to get electrocuted on this event.”

Officials with the city of Rocky Mount were also encouraging people in the area to stay indoors and away from windows if possible.