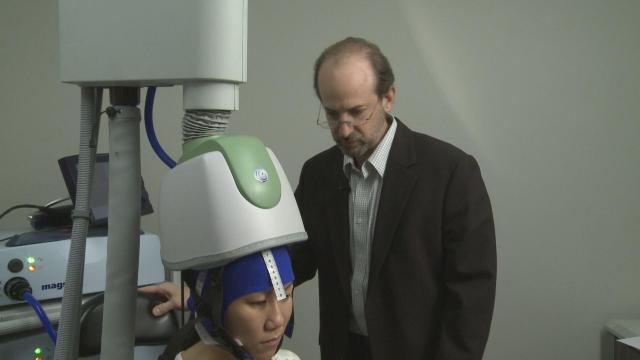 Fifteen years ago, Mary Margaret Elmayan was going through a divorce – as well as a sudden onset of severe depression.

Elmayan said she even had thoughts of suicide. Psychotherapy and medication were not effective enough, so she joined a trial at Duke Medicine. They were looking at a new type of transcranial magnetic stimulation, or TMS.

TMS therapy is approved by the Food and Drug Administration as a treatment option. Psychiatrists say it's less invasive and has fewer side effects than electro-convulsive therapy.

In the Duke study, participants wear a helmet with a special coil that delivers a magnetic stimulus to the brain.

“Saw a nice electrical response in the hand muscle,” Duke psychiatrist Dr. Andrew Krystal said as he demonstrated the helmet on Rosa Jou-Zhang.

Once he's able to stimulate the area of the brain that makes her hand move, he can then find the area in the prefrontal cortex where depression resides.

TMS therapy isn't new, but researchers have been looking for more effective ways to deliver it.

Images show the H coil affects a broader region of the brain.

Study participants either got the actual treatment, or a fake one. Elmayan learned she got the real thing.

“I realized I was sleeping better. I realized all of the sudden that food tasted better,” she said. “It was just wonderful. I was so excited. I felt like I was myself again. For me it's nothing short of miraculous.”