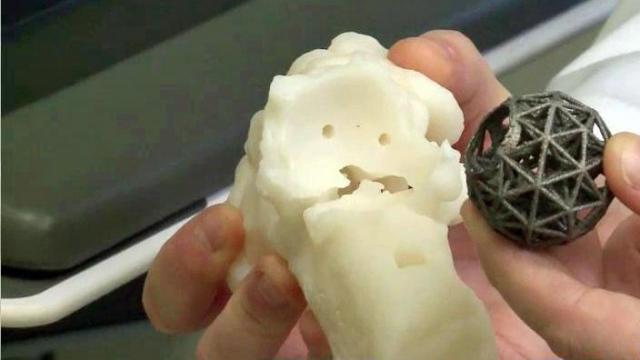 Last February, 47-year-old Ruth Smith-Leigh was driving her two sons from an activity in South Boston, Va., when a car hit them head on.

Her car flipped over, but the boys were fine.

“Something was wrong with my leg, but I just thought it was a simple break,” Smith-Leigh said.

The break was bad.

A Virginia doctor gave her the bad news.

“The doctor actually told me that I had to have it amputated,” Smith-Leigh said. She lost bone in her leg during the accident and severely fractured what was remaining.

“Her own bones will grow into her implant and it's just as strong as her native bone, if not stronger,” Adams said. “It's a scaffold. That bone will grow into a truss system, and through the center of truss system is a titanium rod.”

For Smith-Leigh, her ankle won't be able to flex, but she's thankful to be able to stand and walk on her own feet.

Adams said, “Her outlook is very good, I actually have a CT scan to show that her bone is growing into the implant.”

She's doing so well she is ready for a special ankle brace and a supportive shoe.

“I feel excellent. I actually returned back to work. I teach school and I'm very passionate about teaching,” Smith-Leigh said.

Customized implants like Smith-Leigh’s are made using CT scans of patients injured area, in this case, the leg, ankle and foot. Scans are sent to a company in Texas called 4Web, which programs the information into a computer. That information is programmed into software that is used to "print" the implants that are later surgically placed in the patient.

A few patients in different centers around the country have received Smith-Leigh’s implant, but hers is the first in the state.