The light rail line would stretch 18 miles from UNC Hospitals in the west to the campus of North Carolina Central University in the east, with 12 proposed stops along the way. But for the line to become reality, Duke University must donate land where the line would cross its campus.

Duke hasn't yet provided the land, and Duke President Vincent Price last month said university officials are concerned about the impact the project will have, particularly about road closures and construction along Erwin Road, by Duke University Hospital, that could make it difficult for emergency vehicles to navigate.

"I really don't understand why Duke isn't happily joining in," said Anne Slifkin, who wrote a letter to the editor of the Duke Chronicle, the student newspaper, in support of the light rail plan.

"I feel like Duke needs to show that they’re truly a member of our community – the Durham community, the Chapel Hill-Durham community," Slifkin said. "I think a lot of people, myself included, will be angry, disappointed in Duke [if the project is derailed], and that will remain. It will not be a short-term feeling."

Martha LeFebvre, who also wrote a letter to the editor of the Duke Chronicle, agrees.

"This is good for the citizens of Durham. It's good for the future of the city. It's time for there to be courage and people standing up for the need to do this," LeFebvre said. "We have a chance to make a name for ourselves in the South as a progressive city, and we need universities to stand behind that. I think Duke owes it to itself also, as an institution of higher learning, to model and demonstrate priorities. The priorities of environmental wellness should be high on the list." 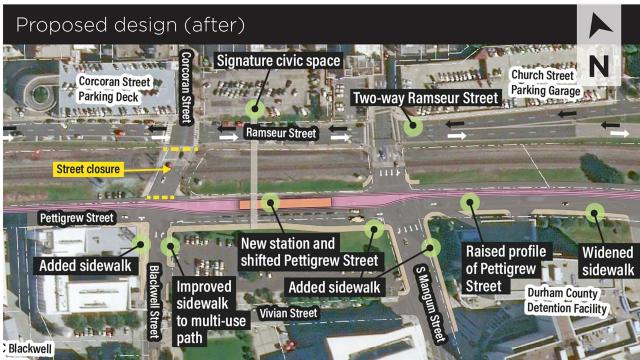 Across town, the Durham Performing Arts Center has also expressed concerns about the light rail plan.

DPAC General Manager Bob Klaus wrote to Mayor Steve Schewel and City Manager Tom Bonfield on Monday, calling the plan to close the intersection of Blackwell and Pettigrew streets to vehicle traffic "a mistake" that will limit patrons' access to parking and restaurants.

Blackwell Street is a main artery connecting DPAC and the nearby Durham Bulls Athletic Park and American Tobacco Campus with the rest of Durham's rapidly revitalizing downtown. But GoTriangle, the regional transit agency developing the light rail line, has said closing the intersection is necessary because of safety concerns related to the Blackwell Street's elevation.

"Next to the quality of the shows and staffing, the most positive feedback we get from DPAC customers relates to ease of parking and the abundance of nearby restaurants," Klaus wrote. "The GoTriangle Plan will turn what is today a positive for the 'DPAC Experience' into a negative."

The plan to convert Pettigrew Street into a one-way, eastbound thoroughfare would increase traffic congestion and confuse drivers looking for parking, Klaus wrote, and plans to raise the elevation of Mangum Street threaten DPAC's box office with flooding in heavy rains.

Booster organization Downtown Durham Inc. expressed similar concerns about the closure of the Blackwell Street intersection and other proposed traffic changes in a letter to GoTriangle last week, saying the moves would cut the downtown area in half.

"The 'look and feel' of a downtown has always been critical to its success," DDI Chairwoman Jessica Brock and Chief Executive Nicole Thompson wrote in the letter. "We strongly believe that the success of [light rail] and downtown Durham relies on a robust exploration of alternative concepts that considers effects of the alignment through downtown, especially where street closures or conversions are proposed."

Capitol Broadcasting Company, the parent company of WRAL News and the owner of the DBAP and the American Tobacco Campus, also opposes the Blackwell Street closure.

The dispute caused Michael Goodmon, vice president of real estate for Capitol Broadcasting, to resign last month as chairman of the nonprofit GoTransit Partners, which has been seeking grant and donor funding for public transportation initiatives.

GoTriangle wants all of the land agreements signed by the end of the year. City and Durham County officials said they are confident they will be able to work out the concerns.