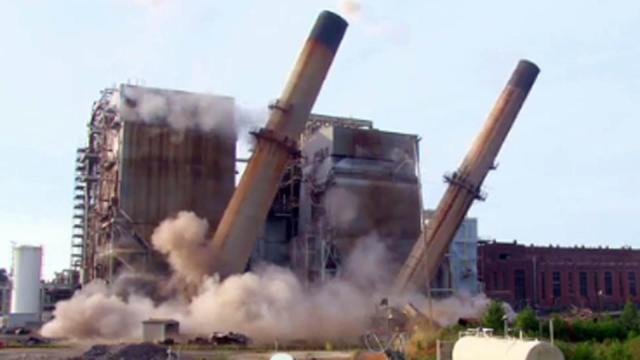 The 90-year-old Cape Fear Plant was shut down in 2012 as Duke shifts to natural-gas fired plants to reduce air pollution.

"The Cape Fear Plant has been a part of the local community and a key part of powering the region for nearly a century," Indira Everett, Duke's district manager, said in a statement. "The implosion of the stacks marks a milestone in the company's comprehensive effort to transition to cleaner and more efficient energy sources."

The implosion of the 200-foot-tall smokestacks is the first phase of a three-part demolition of the plant by the end of the year. The second will take down the precipitators that formerly captured fly ash when the plant was operational, while the third will demolish the boilers and additional structures at the site.

Duke expects to complete filling, grading and seeding the land by mid-2015. The coal ash basin closure process will operate on a separate schedule.

"Our team will now focus on restoring the land and using a science- and fact-based approach to determine the most appropriate site-specific closure plan for the ash basins," Everett said.

The Charlotte-based utility completed the implosion process at a former Goldsboro power plant in June.