Duke, adjunct faculty agree to union contract, first of its kind in South 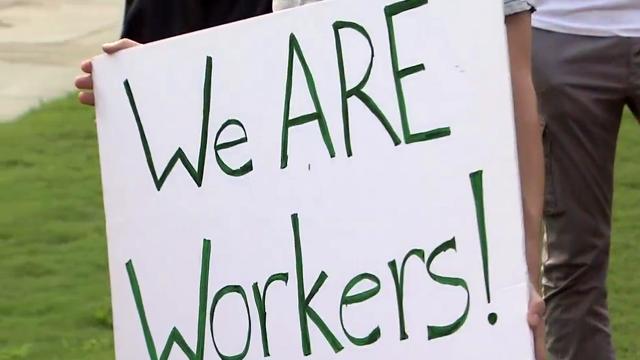 Durham, N.C. — In what some are calling a groundbreaking deal, Duke University has tentatively agreed to a three-year contract with hundreds of faculty members who have been fighting for higher pay, more job security and professional development.

The contract with some 275 part-time and full-time contingent faculty would be the first faculty union contract at a major private university in the South. Faculty members will vote during July on ratifying the pact.

"We're very excited to embark on a renewed and strengthened mission to enlighten some of the nation's finest young minds and provide a world-class education at an institution that is slowly but surely recognizing the tremendous contributions we make," biology instructor Christopher Shreve said in a statement. "Our solidarity is our strength, and our strength together will improve the lives of both faculty and students for years to come."

Shreve recently told WRAL News that he has taught at Duke for 14 years but still makes less than a starting teacher in Durham Public Schools, so he has to work two part-time jobs to make ends meet. Other Duke instructors, he said, earn so little that they qualify for food stamps.

The tentative agreement includes multi-year teaching appointments, plus pay increases as high as 46 percent for the lowest-paid faculty over the three years. Faculty also will receive the same benefits on the same terms as other Duke employees, pay protections for canceled courses and a new fund dedicated to professional development.

"Our successful negotiations with Duke University represent a first step toward treating contingent faculty with dignity, equity and respect," Mike Dimpfl, lecturing fellow in the Thompson Writing Program, said in a statement. "Our commitment to students remains at the heart of our concerns, and we look forward to building strength at Duke, across the South and beyond."

Through the Faculty Forward campaign of the Service Employees International Union, Duke faculty last year became the first instructors at a private university in the South to form a union in nearly 30 years.