Raleigh, N.C. — State lawmakers plan to unveil three tax reform proposals Thursday morning, but they don't plan to vote yet on any of them.

House Bill 998 is expected to cost about $1.2 billion over the next five years. Lewis says it extends sales tax to some services for businesses that already collect sales tax for goods. It does not tax groceries or prescription drugs.

Senate Bill 394 is a bipartisan reform package backed by Sens. Fletcher Hartsell, R-Cabarrus, and Dan Clodfelter, D-Mecklenburg. Its changes to the sales tax are similar to the House proposal. 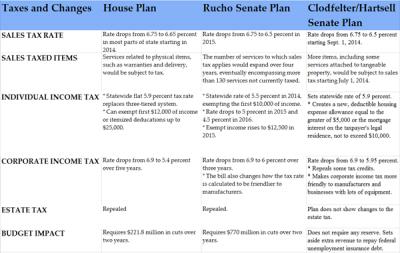 Senate Bill 677 is the proposal that's been talked about a lot this session, but hasn't yet been seen – a sweeping rewrite of the state's entire tax system sponsored by Sens. Bob Rucho, R-Mecklenburg, and Bill Rabon, R-Brunswick. It would add more than 130 new taxes, including on groceries, prescription drugs and Social Security benefits.

Senate budget-writers set aside $770 million over the next two years to pay for the reform package.

The details on all three plans are still vague and will remain so until their respective sponsors unveil their proposed committee substitutes.