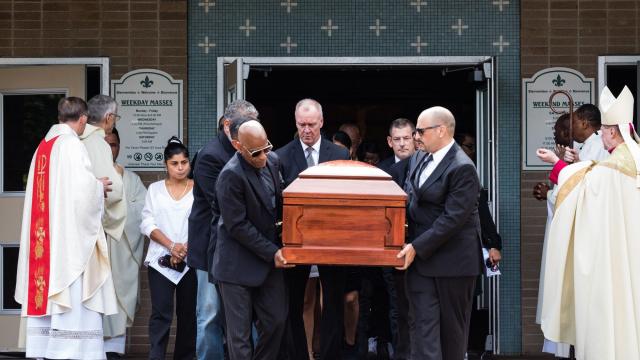 CENTRAL ISLIP, N.Y. — In September, at the Long Island cul-de-sac where two years ago her teenage daughter was found murdered by transnational gang MS-13, Evelyn Rodriguez saw that the memorial she had placed there that day was gone.

The woman who had dismantled it — because she was trying to sell the house behind it — was about to drive off with the destroyed mementos, authorities would later learn.

Rodriguez, who had become a nationally known anti-gang activist after the killing of her daughter, Kayla Cuevas, confronted the driver, as did Kayla’s father. In the ensuing horrific scene caught on video by a local news crew and confirmed by the Suffolk County prosecutor’s office, the driver, Annmarie Drago, first hit Evelyn Rodriguez with her front wheel, causing Rodriguez to flip onto the pavement.

Drago then kept going, running over her body with the back tire, fatally crushing Rodriguez.

On Friday, a grand jury unsealed an indictment of Drago, 58, on charges of criminally negligent homicide, criminal mischief and petit larceny, according to the Suffolk County district attorney, Timothy D. Sini.

“This is not a case where anyone is left wondering what happened,” Sini told reporters at a news conference in Central Islip. The video evidence made it plainly clear, he said. “Criminal negligent homicide does not require intent to kill. It requires being grossly negligent, causing the death of another, and that’s exactly what happened.”

Stephen Kunken, the lawyer for Drago, who pleaded not guilty at her arraignment Friday, said his client’s actions “were neither intentional nor reckless.”

“My client has asked me to extend her sincere condolences to the family of Evelyn Rodriguez, to her friends, and to her community,” Kunken said in a statement. “What happened on Sept. 14, 2018, was a tragic accident. My client is a hardworking mother of two sons. She is a registered nurse, and a teacher.”

Drago had been trying to sell the house for her mother, according to prosecutors. The body of Kayla, 16, was found behind the house after MS-13 members had used baseball bats and machetes to kill her along with her friend, Nisa Mickens, 15, authorities said. Kayla had been in a dispute at school with one of the gang members.

The death of the two U.S.-born girls set off a national outrage during President Donald Trump’s campaign, and he has continued to make MS-13 a focus of his administration. Several members of MS-13 have been charged in the killing of the two girls.

Rodriguez went on to advocate for gang prevention efforts in schools, and while she declined to campaign against immigrants living in the country illegally — only those who came to the United States to do harm, she said — Trump featured her as a prime victim of immigrant crime.

He invited her to his State of the Union address this year, along with Nisa’s parents.

Hours before a memorial service for the second anniversary of Kayla’s death, authorities said, Drago took down a floral arrangement, destroyed candles, popped balloons and stuffed larger items, including a table and a wire stand, into her white SUV.

Both Rodriguez and her partner, Freddy Cuevas, were alerted that the memorial was gone and came to the site. They started arguing vociferously with Drago, who was in the car with her boyfriend, telling her not to drive off with the precious mementos.

Rodriguez was in front of the car. Cuevas went to the back. “Freddy warned the defendant, ‘You will run over Evelyn if you drive away,'” Sini said.

Kelsey Cuevas, 20, the older daughter of Rodriguez and Freddy Cuevas, was in the courtroom Friday and said this was the beginning of the family’s quest for justice.

“A ‘sorry’ doesn’t bring my mother back,” she said.

Later, Kelsey Cuevas spoke emotionally of her mother’s legacy: “She taught me to always stay positive, never give up and always make sure that you are heard.”