Raleigh, N.C. — The Raleigh skyline could change drastically in the coming years, with dozens of high-rise buildings mixing offices and luxury living spaces either under construction or in the planning phase.

“People are coming here all the time, so we think development will continue, and we just do it in a smart matter," said Chris Carlino, a partner in Dominion Realty Partners, which opened the latest downtown Raleigh tower on Wednesday.

"We are really selling the dream of living in the sky here," Carlino said.

The FNB stands for First National Bank, which is putting its regional headquarters in the building and has a long-term lease as its anchor tenant. 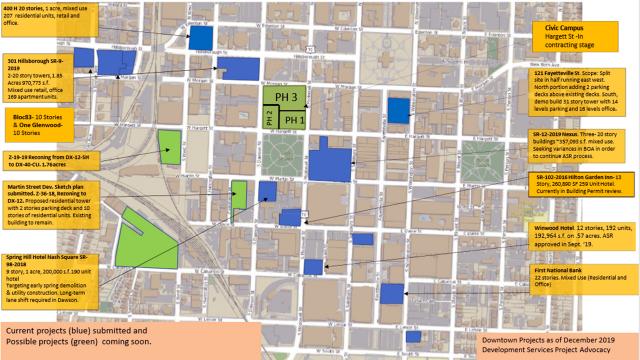 James Maripoti, who works with developers on their permits and inspections as project advocacy manager in Raleigh's Development Services office, said he sees large mixed-use developments popping up all around.

“The skyline will drastically change," Maripoti said. "Within the next four months to four years, look at 30 to 50 more mixed-use towers coming up in Raleigh alone."

His estimate includes projects in North Hills and along Interstate 440 in north Raleigh and large-scale developments south of downtown, such as the proposed Downtown South project that would include a stadium for a Major League Soccer team.

“It can take years to get it off the wall and out of the ground," Carlino said of such large projects.

The Raleigh City Council approved a zoning change on Tuesday night for a nine-acre development near Dorothea Dix Park. The Park City South project could include up to 1 million square feet of office and industrial space, 312,000 square feet of retail space, a hotel and 975 residential units in towers up to 20 stories tall.

"Right now, it has the right ingredients," Maripoti said of the city's building boom. "So long as the economy stays constant the way it is right now – the labor force and materials – it is going to be pretty strong."