Dozens arrested in Durham during protest to raise fast-food pay 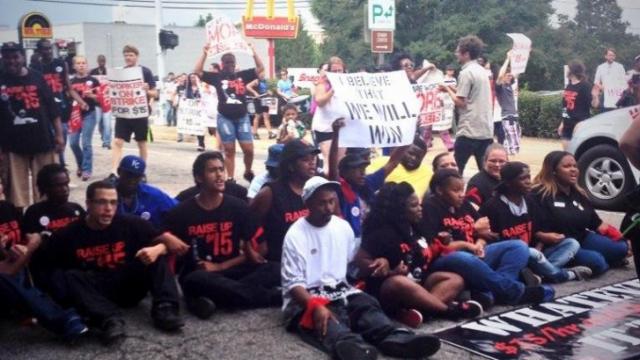 Durham, N.C. — Nearly 30 people were arrested in Durham on Thursday while protesting for fast-food companies to raise worker pay.

The protesters, who walked off their jobs as part of a national protest, sat in middle of West Morgan Street before blocking the intersection of Rigsbee Avenue and Morgan Street, Durham police said. The group then marched to Morgan and West Main streets, where they again blocked traffic.

The 26 people arrested were taken into custody nearly three hours after the protest started, police said.

“Our officers used great professionalism during this event today and were able to make these arrests without incident,” Durham Police Chief Jose L. Lopez Sr. said in a statement. "The officers closely monitored the situation and individuals in the group asked to be arrested."

Thursday event, organized by Raise Up for 15, a workers association representing fast-food workers in the South, is part of a national effort to convince fast-food restaurants to raise their hourly pay to $15 and allow workers to form a union.

George Hargrove, who works at a McDonalds in Durham and was arrested during the protest, said he makes $7.75 an hour after working at the restaurant for 12 years.

"I'm participating in the nonviolent civil disobedience for higher wages so I can afford to take care of my family," he said in a statement. "We need to make sure that our voice is heard and bring union rights to fast-food. we need to show these companies how serious we are. We are struggling to survive and are going to do whatever it takes to win.”