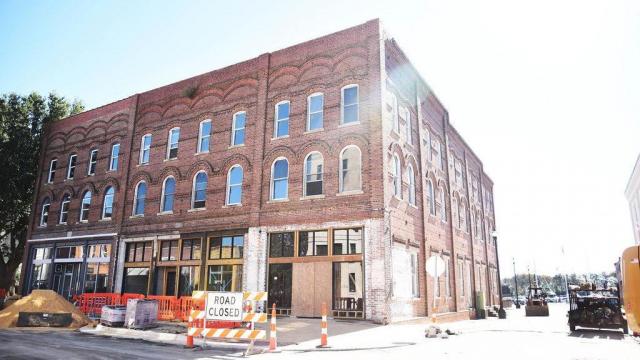 From Wilmington to Asheville and everywhere in between, North Carolina arguably boasts one of the best beer scenes in the country.

According to the N.C. Craft Brewers Guild, North Carolina ranks seventh for craft beer production in the United States. Its breweries large and small are putting the state on the map, with many quickly making a name for themselves on the national stage.

And now, Washington is ready to throw its own name into the ring.

A project that's been years in the making, the Mulberry House — the town's first-ever brewery — will be part-brewery, part-restaurant and part-hotel, bringing a unique combination to downtown Washington. While the brewery was originally going to be called Castle Island, the owners decided to pivot to preserve the history of Washington.

"The name was picked by one of our owners, and she was doing some research and found that one of the first houses in Washington was called the Mulberry House because it had this big mulberry tree right out front. We wanted to tie in that history a bit to this new project," said Alyddin Darar, the Mulberry House's project manager. "This is a historical building renovation — the building is over 200 years old, but by transforming it into a microbrewery, a restaurant, and a hotel we're trying to bring something to Washington that hasn't really been here before. We really envisioned the Mulberry House as a community hub."

Downtown Washington is in the midst of several major construction projects and the Mulberry House will be just another piece in the puzzle. The town is completing a massive downtown streetscape that will both beautify and modernize the area.

Still, that modernization doesn't come at the price of sacrificing history. In fact, rehabilitation of historic buildings is part of what makes downtown Washington so unique.

Since the new brewery is a significant project, many in the town hope it spurs others to make similar investments in the community.

"We have a really vibrant downtown, and if there are any vacant buildings at this stage, they're likely in the process of being rehabbed. We're all about saving what we have here through adaptive reuse of a building — and as more awareness of the environment has grown, there is no greener building than one that already exists," said Scott Campbell, a Washington-based realtor with experience in repurposing and rehabilitating historic buildings. "For a massive project like the brewery to come in and say, 'Hey, we're willing to stake a huge amount of money in this town,' bodes well for other people to say and do the same thing."

While some communities are hesitant to take on big changes, Washington residents have shown nothing but enthusiasm for the project. According to Darar, he's regularly approached by people on the street expressing interest and sharing glowing reviews of the progress.

The grand opening of the Mulberry House is slated for fall of 2021, and the final few details have mostly fallen into place. The restaurant's menu will be curated by a New York City chef with past roles in the restaurant and hotel industries and an experienced brewmaster will be handling production on the microbrewery side.

With a prime location and a rooftop view overlooking the waterfront, both Darar and Campbell see the Mulberry House as a catalyst for traffic in the community — especially as the weather cools down and local colleges like Beaufort County Community College and East Carolina University return to normal sessions.

"We're really trying to bring something to Washington that the community can get behind and celebrate — and not feel like it's taking over the area. We'd like to see it support the community and other downtown businesses and serve as a place for people to come together," said Darar. "Something that's really unique about Washington is that you can access downtown through the water, which not a lot of cities in North Carolina can boast. We definitely want to take advantage of that and we are hoping the brewery will increase foot and water traffic downtown."

"At the end of the day, we're really focused on amplifying, rather than eclipsing, nearby businesses and boutiques," continued Darar. "We want to bring people here to see how beautiful Washington is, and hopefully fill the boardwalk with new faces from surrounding areas who will share our affinity for the community."