Down the Aisles, a Secret Shelter for the Homeless 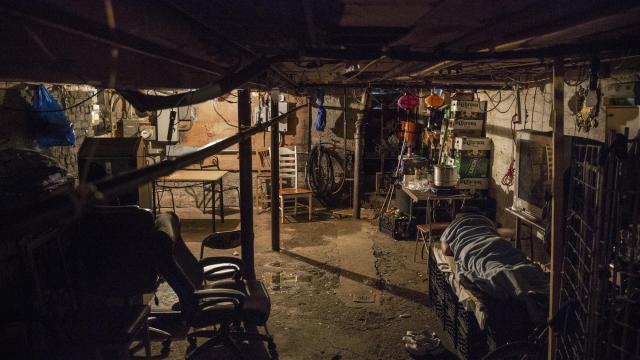 NEW YORK — Between the racks of canned beans and rolls of toilet paper in a bodega in Borough Park, Brooklyn, a staircase hides beside the shelves.

It leads to a cavern where, for the past 14 years, the bodega owner has quietly housed scores of homeless men, some with violent pasts and mental illness. He takes them in, from local park benches and street corners, unable to bear the idea of anyone out in the cold.

Here, beneath the shelves of instant soup and paper towels is an unauthorized shelter in its most primal form — a dank unfinished basement, cavelike and fetid, where the men sleep on pallets amid pools of dark water on the cement floor.

But there is real warmth, the men say. It comes from behind the deli counter, where seven days a week, stands the welcoming bodega owner, Candido Arcángel.

The shop is zoned for commercial use, and the basement does not have the required certificate of occupancy to permit people to live there. Arcángel has not made the necessary applications to the Department of Buildings to convert it into habitable space, which would require an inspection to determine if it is safe to do so.

The absence of permits has not deterred Arcángel, who says his reasoning for opening his basement to the homeless is simple. “Because they don’t have,” he said. “And I do.”

Arcángel is certainly not the first person to harbor the homeless in an untraditional setting. In Chicago last week, a man agreed to stop allowing homeless people to stay in his basement during frigid nights; in Brooklyn, a woman who had been sheltering the homeless in her home for decades eventually became the inspiration for a play, “Queen of Chesed,” that debuted last year.

Because Arcángel’s makeshift shelter is likely illegal, he asked that the precise location and name of his store not be disclosed. Between six and a dozen people live in the basement at any given time, he said.

There are a few rules: Men must be in for the night when the bodega closes at around 10 p.m.; after that, they may leave, but cannot return until the shop opens at 8 a.m. Arcángel does not charge a fee, and he pays for whatever electricity is used by the men, which he estimates costs him about $400 a month. It powers the lights, a hot plate and a large-screen television someone found on a street corner and lugged inside.

That is where the amenities end.

On a recent afternoon, three men slept in sour-smelling blackness. One man stretched across 22 neatly stacked plastic milk crates, a pastel blue coverlet drawn up to his shoulders. Wires and pipes stippled the ceiling. In a corner, a black hose dripped unceasingly into a hole in the ground — a makeshift shower. Recently, the bodega cat had a litter among the wet cardboard, cigarette butts and rags. A tabby kitten pounced beside the milk-crate bed, chasing something that scuttled across the earth.

Arcángel recognizes the limitations of the crude shelter he provides; its rawness, he imagines, will prevent anyone from getting too comfortable. He aspires to be a way station for men who don’t get such things, but he fears his refuge becoming a crutch.

Arcángel grew up in the Dominican Republic, with dreams of becoming a baseball player. He played professionally on aVenezuelan team for one year, he said, before a shoulder injury ended his career and he left for America in 1989. It was his experience as a boy playing on teams — where children from working-class families like himself played alongside street children — that showed him how providing some structure, even in the form of uniforms, bats and gloves, transformed his teammates’ lives.

“These youths that were lost, you have to find them, and bring them in, so they could love God,” he said. “This is not a personal mission; it’s a mission for the good of society.”

Once in New York, he found work in the bodega he now owns, stocking shelves and flipping eggs for breakfast sandwiches there for 14 years before he purchased the business from his boss over a dozen years ago.

Before he bought the store, Arcángel said, he would ask the owner if the indigent men who stopped in to beg for change, coffee and muffins, could rest in the air-conditioned store in summer, or warm up inside when it was cold. “Always, ‘No! Are you crazy?'” he recalled with a laugh. The month he bought the shop, he said, he invited in his first homeless guest.

“We are wolves. We are men who cannot be domesticated,” said William Arroyo, 57, who says he has lived underneath the bodega for five years after serving time in prison for murder. “Here,” he said, “is the wolf den.” There were more than 62,000 homeless people living in city shelters as of October 2017, according to the Coalition for the Homeless, an advocacy organization, a 75 percent increase from the number a decade ago. It is difficult to estimate how many more live on the street, but a survey conducted in February by the city’s Department of Homeless Services found about 3,900 people living on the streets, an increase of nearly 40 percent from the year prior.

Many customers buying egg sandwiches from Arcángel were aware that a rotating crew of men hang around the bodega for hours, sipping beers inside, or sit staring at nothing in the courtyard out back. But even the regulars do not know where they sleep.

Jorge Borgias, 33, works at the upholstery shop next door, and takes coffee breaks at the bodega. He, too, is homeless, he said, but lives in a shelter nearby. “They live there?” he said. “Something must be wrong with the world.”

The men say they respect Arcángel. They straighten their shoulders when he passes them begging on the street, and police themselves when one of their number becomes unruly. Arcángel, with a raspy voice and easy, cartoonish smile, says he has never been robbed by his overnight guests.

The homeless visitors try to heed his daily exhortations to leave each morning and search for work, and there are some success stories: The first man to whom he ever gave shelter calls the bodega regularly, he said, to share updates about his recovery, his wife and children.

And for some residents like Arroyo, the basement harbors a resource even scarcer in this city for men like him, he said: kindness. More than a roof, more than food, Arroyo said, at night, huddled in the dripping dark, he and his bedfellows crave just one thing. “Someone who will say, ‘Hello, blessings. How are you?'”